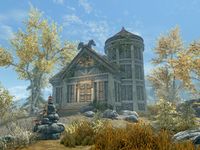 Tundra Homestead is a cottage that can be purchased in Whiterun Hold, located just northeast of Battle-Born Farm.

A note from the previous owner titled Homestead For Sale is posted next to the door. The note directs you to the steward of Whiterun, either Proventus Avenicci or Brill, to buy the house for 7,500 gold.

The property includes several outdoor features. Behind the cottage there is a garden with eight open plots of Fertile Soil, three potato plants, two cabbages, two gourds, and two leeks. Nearby are two apiaries that work the same way as the one at Lakeview Manor. Two covered areas are in front of the house, and the one to the east has all the necessary Smithing tools: a smelter, anvil, grindstone, tanning rack, and workbench.

The large room you enter into features a fireplace on the opposite wall with a cooking pot and a baking surface that functions as an oven. This room also contains several storage safes and a copy of The Aetherium Wars. The bedroom on the left contains a double bed and two single beds intended for children, as well as shrines to Akatosh and Mara. On the right, there is a smaller circular room with an alchemy lab, an arcane enchanter, and a Shrine of Julianos. Notably, the Alchemy skill book A Game at Dinner and Enchanting skill book Enchanter's Primer are found next to their respective crafting stations. A Bone Hawk Skull can be found next to the arcane enchanter. This room has a trapdoor down to the cellar. 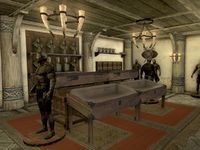 At the bottom of the ladder, you find yourself in a circular room similar to the top level. Directly ahead is a large trophy room filled with display cases, mannequins, weapon racks, weapon plaques, and holders for various unique items. Four display cases and two mannequins in the center take up the majority of the space. Starting on the left, there is a wooden board with places to hold all ten dragon claws. Four mannequins, three display cases, and three weapon plaques cover the north wall. The east wall has two high shelves; one holds the five bugs in a jar, Torsten's Skull Key, and Saerek's Skull Key, while the other holds the five paragons from the Forgotten Vale, Auriel's Shield, and the Initiate's Ewer. Between these two shelves is a set of busts to hold all of the dragon priest masks except Miraak. There are also weapon racks below the high shelves. Finally, the south wall is lined with four more mannequins.