Other Unique Items covers any unique items that do not fit into any other category of item. These items are available in Skyrim in fixed locations, unlike most equipment in the game, which are randomly generated or generic equipment. 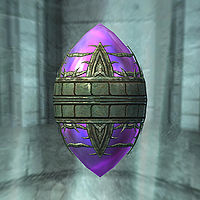 The Amethyst Paragon is located on a frost giant northwest of the Shrine of Learning, near the path up to the paragon platform, in the Forgotten Vale, opposite the end of the river that leads into the Darkfall Grotto. If placed into the gem holder for the Paragon Portal, it will create an opening to an area above the Darkfall Grotto, with a chest filled with leveled loot.

The Ancient Traveler's Skull is the skull of a Traveler whose skeleton can be found in Wayward Pass. In appearance, it is identical to a generic skull. It is heavier and worth less than a generic skull.

"Supposed to be sort of valuable"

The Aretino Family Heirloom is a plate gifted to you by Aventus Aretino in Innocence Lost. In appearance, it is identical to a generic plate. It weighs the same, but it is worth more.

"Allow me to give you this, the fork I used the first time I tasted one of your dishes"

Balbus's Fork is a fork carried by Balbus. Balbus is a fan of the Gourmet, and it is with this fork that he tasted one of his dishes for the first time. If you have completed Recipe for Disaster and possess the Gourmet's Writ of Passage, he will gift it to you. In appearance, it is identical to the weapon fork variant. Unlike those forks, Balbus's Fork is a miscellaneous item, it weighs nothing, and it is worth nothing.

"Don't let this innocent-looking flute fool you, for this is the Dancer's Pipe. Legend holds that the Dancer's Pipe has won wars, toppled empires and changed the very course of history. None know its origins, but the stories say that men who hear its music are compelled to dance uncontrollably, no matter the peril. To activate this strange power, one must only speak the magic words, which are... Oh my, I very nearly got us both into a nasty predicament, didn't I?" — Calixto Corrium

The Dancer's Flute, also known as the Dancer's Pipe, is a flute on display in Calixto's House of Curiosities. In appearance, it is identical to a generic flute. It weighs the same, but it is worth less. 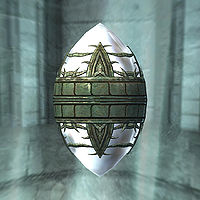 The Diamond Paragon is found in the Forgotten Vale on a frost giant after traversing the normally accessible Glacial Crevice and before the Shrine of Radiance. Turn left up a path into mountains immediately upon departure from Glacial Crevice and before running into the second part of the Falmer's mountain homesteads. Two leveled Falmer must be killed and past their little outpost should be the frost giant, wandering about among several dead Falmer. The paragon will create an opening to an area above the Glacial Crevice if placed into the gem holder for the Paragon Portal, and it will have a single chest with leveled loot. 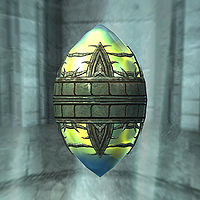 The Emerald Paragon is held by a frost giant who is located on an area fenced off by the Falmer in the top of the canyons at Forgotten Vale. Specifically, this is in the area beyond the Shrine of Resolution, and before the Glacial Crevice.

Go to the Shrine of Resolution. Cross the rock bridge to the north. Turn left, heading west, down to a Falmer camp. Turn right and climb the canyon to a second rock bridge. Follow the path to a Falmer bridge. Turn left and cross a third rock bridge. Continue past Sharpslope Cave, on a one way path over more bridges. Just before reaching the top of the western canyon, there is a fenced area to the right where the frost giant is located. Kill the giant to get the Emerald Paragon.

If placed into the gem holder for the Paragon Portal, it will create an opening to the Forgotten Vale Overlook, an area that overlooks the giant lake where Voslaarum and Naaslaarum were located. At the end of the river, there will be a leveled weapon, Unknown Book, Vol. II, and a chest near a corpse. With some tricky moves, you can reach this position from the castle balcony without the paragon.

The Exquisite Sapphire is a reward for delivering a letter by Glover Mallory to Sapphire during Paid in Full. In appearance, it is identical to a flawless sapphire.

The Michaela's Flagon is a flagon in Thonnir's House to the right of the fireplace, hidden behind a basket. In appearance, it is identical to a generic flagon. It also weighs and is worth the same. 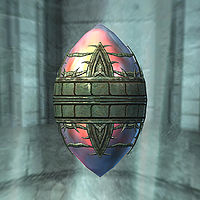 The Ruby Paragon is located on a frost giant in the Inner Sanctum of the Forgotten Vale, behind a door that can only be opened with the Initiate's Ewer. If placed into the gem holder of the Paragon Platform, it will create a portal to Forgotten Vale Forest, an area with Frost Trolls fighting a Falmer that carries an artifact, Auriel's Shield. 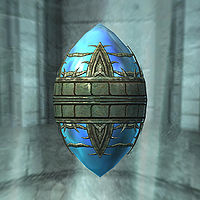 The Sapphire Paragon is located in the Forgotten Vale. To find it, go to the area where the Amethyst Paragon was found, northwest of the Shrine of Learning, and there is a path up the mountain. At the top, turn right towards the waterfall and you should see both the frost giant with the Sapphire Paragon and the gem platform directly across the river from him. If placed into the gem holder of the Paragon Platform, it will create an opening to the Inner Sanctum, with an abundance of leveled gems, several pieces of leveled elven gear, and three chests of leveled loot.

This Skull is located inside Kolbjorn Barrow, found on a weight sensitive plate in the second main room. It differs from standard skulls in that it is engraved and worth 50 gold instead of the normal 5 gold. 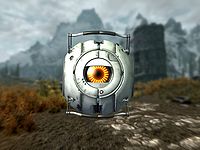 The Space Core is a mysterious alien construct that can be seen suddenly plunging from the sky and crashing on the ruined house (map) near Western Watchtower, setting the ruins on fire. It is constantly animated, saying a line of dialogue when activated, placed in your inventory, and idle. Many of these lines refer to the land and events of Skyrim.

The Space Core can be taken to the Atronach Forge in The Midden and placed on the pedestal to power the forge. By placing an ingot of Refined Moonstone (or a piece of Moonstone Ore) and an Iron Helmet into the offering box, a Dovahcore Helmet can be made.

If blasted hard enough, like by an AoE spell or a Giant's club, the Space Core will be launched back into space and removed from the game. 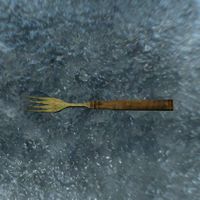 "This is Ysgramor's Soup Spoon. Now, I know what you're thinking - this is no spoon, it's a fork! Nobody can eat soup with a fork! Well, my friend, you did not know Ysgramor." — Calixto Corrium

Ysgramor's Soup Spoon is a fork on display in Calixto's House of Curiosities. In appearance, it is identical to a generic fork. It also weighs and is worth the same.