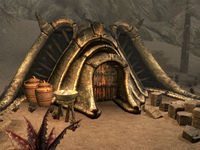 Severin Manor is a home in Raven Rock, initially inhabited by Mirri, Tilisu, and Vendil Severin. It can be later awarded to you by Councilor Morvayn as a quest reward for Served Cold. It can be found as the last house on the right on the way to the Earth Stone, opposite the end of the abandoned building, facing the waterfront.

Approaching the manor you will find a lit brazier to the left of the entrance with two urns behind it. There are three scathecraw and two trama root plants in the front of the house. The ash has built up behind the house to the same height as the house and there are cliffs behind. 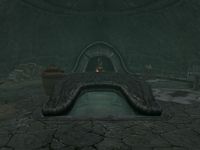 Severin Manor is a typical house on Solstheim, where you enter into the top floor, with the main sleeping areas downstairs with a central stairwell and cooking area on the top floor behind the stairwell. On your left as you enter are five straw bales with an open box containing five ash yams beside them. A bench and pile of firewood are to the right. Against the west wall is a fire place with a cooking pot on a stand in front and a chair to the side. To the right is a round wooden table with two chairs, on the table is a bottle of sujamma and one of shein and copies of The House of Troubles and The Five Far Stars. Against the north wall are three fish barrels, one of which has three loaves of bread on top, to the right of these is a table. The table holds a bottle of sujamma, one of shein, three bottles of alto wine and two bottles of wine, two loaves of bread, three ash yams in wooden bowls and an iron war axe. There is another barrel to the right of the table with four cabbages on top. There is an empty table between this and the entrance. Around the stairwell are two urns on the south side.

Descending the stairs leads to a central corridor with doors leading off to the south and west. To the north is an area for smithing with a bench and two urns against the north wall leading into the main smithing area with a row of three weapon racks on your left, followed by a tanning rack. To the right of this is a grindstone and then a workbench. There is a full blacksmiths forge, complete with anvil against the east wall and a smelter to the right of it. To the right of the smelter is an open crate containing seven steel and seven iron ingots. Beside this is a pile of coal for the smelter. To the south are four straw bales with practice dummies set up in front. There is a central pillar in the middle supporting the vaulted ceiling with six barrels around it, on one of the barrels are three bottles of Nord mead, another has one more bottle of Nord mead and a third has a mead barrel. Opposite the smelter against the central pillar is another row of three weapon racks.

Through the door on to the south you'll find Mirri Severin's bedroom until completion of the Served Cold quest. A bench is opposite the door. Further into the room there is a second bench on your left. Against the north wall are two sacks beside a sideboard with a shelf. On top are three green and one red apples, two boiled creme treats and a sweet roll. On the shelf are three coin purses, one small, two medium. To the right of this are two barrels and then a second sideboard with shelf. On top of this unit is a troll skull and on the shelf are copies of both volumes of The Red Year and Words of the Wind. Against the southeast wall is a single bed and to the left, as you look at it a sideboard with shelf containing two bowls of cabbage potato soup, three bottles of sujamma and two copies of History of Raven Rock, Vol. I. There is an unlocked chest to the right of the bed. To the southwest is a small planting area with seven ash yam and two scathecraw plants growing. Next to these are two flower baskets containing three ash yams.

Back out into the main corridor and further in on the left is an alchemy area with five barrels, three of which contain ingredients. On top of the second barrel is a copy of The Axe Man, on the barrel next to it are an enchanter's philter and solution of enhanced stamina. On top of the four barrel are two elves ears and a bowl of bone meal. Next to this there is a basket on the floor containing sixteen chaurus eggs. There is an alchemy lab against the south wall with sets of shelves either side containing an ashen grass pod, two bowls of bone meal, a piece of burnt spriggan wood, a canis root, six bowls of fire salts, five bowls of frost salts, two bowls of glow dust, three samples of lavender, a pot of spawn ash, two taproots, three trama roots, two potions of minor healing, a potion of minor magicka, a potion of cure disease, a bottle of potent poison, a draught of light feet, a bottle of matze and three sacks. In front of the shelves to the right of the alchemy lab is a large open crate containing four mammoth tusks, To the right of this is another open crate containing a sample of fly amanita, a sample Namira's rot and six chaurus eggs. Finally in this area are two more barrels with a pot of ash hopper jelly and two Felsaad tern feathers on top. 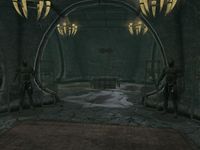 Opposite the alchemy area is an enchanting area complete with an arcane enchanter against the north wall. There are six weapon plaques on the wall and three shield plaques including one directly above the arcane enchanter. To the right of this is a basket containing two trama roots, next to this is a round wooden table with a petty, two lesser and two common soul gems all empty. There are several baskets either side of the arcane enchant, two of which contain a total of three empty lesser soul gems and eighteen empty common soul gems. To the left of all that are two barrels.

Through the door to the west is Vendil and Tilisu Severin's bedroom. As you enter there are four armor mannequins in a square with a weapon rack either side of each of them. Following the room around to the left you find two barrels, there are two bottles of sujamma on top of one of them. To the right is a long table with a row of lit candles on, a chair is at either end and on top are four ash yams, three bottles of matze, one of sujamma, three of alto wine and one of wine, goat cheese wheel, sliced goat cheese, sliced eidar cheese and an eidar cheese wedge. To the southwest is an unlocked chest, an expert-locked safe, an empty set of shelves and another unlocked chest. The double bed is against the west wall with a shield plaque above and another unlocked chest at the foot of the bed. To the right of the bed, to the northwest is a small wooden table and chair. On the table are two bottles of matze and a troll skull. To the right of this is a set of shelves containing an unlocked chest, three empty common soul gems, a potion of minor healing, a potion of cure disease and two potions of plentiful healing. To the right of this is another small wooden table and chair with a bottle of matze on top. Between this and the door are three unlocked display cabinets, the first contains a steel war axe, the second two steel daggers, an amethyst, a garnet and an emerald. The third only has a row of skulls in. There are two pillars supporting the vaulted ceiling, the one on the right as you enter the room has two barrels and a sack by it.

One achievement is unlocked when you take ownership of the house: