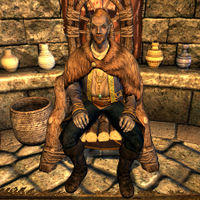 Lleril Morvayn is the House Redoran Councilor of Raven Rock and ruler of Solstheim. His actual influence doesn't spread far beyond Raven Rock without the resources of the ebony mine. He took over from his mother, Brara, in 4E 65, and has been described as a fair and compassionate leader. However, a few bad decisions have made him a target for a possible assassination plot, revealed during the quest Served Cold.

He wakes at 6am and has a two-hour breakfast in Morvayn Manor with his friend and Second Councilor of Raven Rock, Adril Arano, and Adril's wife Cindiri. He then moves to his throne and stays there until 7pm, when he eats a two-hour dinner at the nearby table. After drifting around for a bit, he goes to bed in the upstairs bedroom, locking the door behind him.

He wears a set of fine clothes and fine boots and carries the key to the manor, an elven sword, and a selection of upper-class items and gold.

Lleril has various greetings depending on your quest actions. From when you arrive on Solstheim, he may greet you with either: "Whether you're simply visiting or staying here, I think you'll find our citizens will welcome you with open arms." or "Second Councilor Adrano [sic] can assist you with anything you might need." If you have not completed the quests March of the Dead or The Final Descent, he may greet you by saying: "Anything you can contribute to Raven Rock will be greatly appreciated... and rewarded appropriately, of course." If you have not completed The Final Descent, he may greet you with either: "On behalf of House Redoran and as Councilor of Raven Rock, I bid you welcome." or "Don't let the state of Raven Rock fool you. Our desire for Raven Rock's return to its former glory is as strong as The Bulwark itself." Once the quest The Final Descent has been completed, Lleril may greet you by saying: "Your contributions have earned you citizenship here, friend. I'll always consider you one of us." When March of the Dead has been completed, he may greet you with: "Traveling beyond The Bulwark will be much safer as the result of your victory at Fort Frostmoth. Many thanks." After you have completed the quest Served Cold, Lleril may greet you by saying either: "I feel I owe you my life for thwarting the House Hlaalu plot to have me assassinated. My deepest thanks." or "The mines are open and the ebony has begun to flow because of your discovery. My eternal gratitude and blessings go with you, friend."

When asked about House Redoran, he will say, "You've never heard of House Redoran? We're the mightiest of the Great Houses and we lead the Council, the ruling body of Morrowind." You can then question him about the Council and the fact that he didn't mention a jarl. He'll answer, "This isn't Skyrim, outlander. A group of powerful and influential Dunmer families have been ruling Morrowind for millennia. They embody a council made up of five Great Houses: Telvanni, Dres, Indoril, Sadras and Redoran." If you ask him to clarify about Redoran leading the council, he will respond with "Well of course. With four other houses on the Council, someone has to keep the rabble organized. Our house leads the Council by virtue of our preeminence in battle, wisdom, and ancestral glory." You can then comment that it all sounds rather complicated, and he'll tell you, "Yes, I imagine it would to someone not of our people. If you're interested in pursuing the subject, help yourself to any of the historical volumes in my library." When exiting conversation with him, he'll say, "My doors are open if you wish to discuss matters involving Raven Rock."

You may witness Lleril discussing finances with Adril:

Lleril: "Did you look over next month's expenses? Will we have enough?"
Adril: "No, Councilor. I'm afraid we're going to fall short once again."
Lleril: "Very well, cover the difference from my personal treasury."
Adril: "Your coffers are running low, Councilor. At this rate, your treasury will be empty by next winter."
Lleril: "It doesn't matter, Adril. I'm responsible for those people and I'll make whatever sacrifices are necessary to keep them alive."

This Skyrim-related article is a stub. You can help by expanding it.
Retrieved from "https://en.uesp.net/w/index.php?title=Skyrim:Lleril_Morvayn&oldid=2469087"
Categories:
Hidden categories: