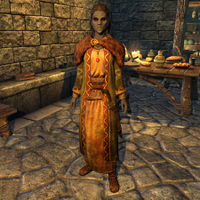 Cindiri Arano is a Dunmer who lives in Raven Rock. She is the wife of Adril, the Second Councilor of Raven Rock. She is originally from Blacklight, though she hasn't seen the city in fifty years, and has spent some time in Vvardenfell. She desperately wants to return to Blacklight, but she can't convince Adril to leave Councilor Morvayn's side. She's concerned for her husband's safety, believing his duties put him in harm's way. She's lost an important folio and is looking for someone to retrieve it.

Cindiri wears fine clothes with fine boots, and she carries an elven dagger, a key to Morvayn Manor, and a selection of upper-class items and gold.

Do you know someone called Miraak?
"Why does that sound so familiar? There's no one here by that name, and yet I swear I've heard it."
What does that mean?
"I... I don't know. It almost feels like a dream. Something about a temple on the island..."

"You look able enough to venture outside of town. Perhaps you could help me recover something precious that was lost?"
You mentioned that you lost something?
"A few months ago, I had sent an important folio to the First Edition Bookshop in the Imperial City to be rebound. They sent it back to me recently, but it never arrived."

Was it aboard a ship?
"Yes, the "Strident Squall" or something like that. The damn thing sunk right off the coast of Solstheim. Can you imagine?"

Actually, I already have it. (Give Folio)
"Mephala bless you! You found it! Well, you've certainly proven your worth around here to me. Please, accept this gift as a token of my appreciation!"

How do you know?
"One of the sailors survived. Poor thing crawled all the way to Raven Rock on his hands and knees. Before he died, he told the Redoran Guard about the wreck and warned us that it was going to be crawling with reavers."

You can then accept or decline to help:

Sorry, can't help you with that.
"Offer to help and then change your mind because I mentioned the reavers? Hmph, some sellsword you are."

I'll see if I can find the book for you.
"Thank you, you have no idea how much it hurts losing such a precious heirloom!"

When exiting conversation with her after accepting:

"My husband is second councilor, so I certainly have the means to reward you if you find my folio."

Once you return with the Folio:

I've found your missing Folio.
"You have? You have no idea what this means to me... to my family. Reclamations bless you! Well, you've certainly proven your worth around here to me. Please, accept this gift as a token of my appreciation!"

She will accept Sadri's new drink:

Geldis Sadri wants you to try his new drink.
"Oh, how kind. Thank Geldis for me, won't you?"

Do you want to be the new steward of Tel Mithryn?
"I could never leave Adril behind, and he will never leave Lleril. Besides, I'd never work for Neloth! I heard he cut the heart out of his former apprentice."

Her potential greetings are:

"As the wife to the Second Councilor of Raven Rock, it would be my pleasure to help you any way that I can."
"I can't tell you how relieved I am that Miraak's gone from my mind. I appreciate what you've done."
"I can't believe Miraak made us build those shrines. To take our free will like that... just horrible."
"Ugh, I can't believe I was forced to do manual labor at those shrines. It was horrifying..."
"You've brought Raven Rock back from the brink, traveler. I don't know how to thank you."
"Your efforts in Raven Rock have proven most invigorating for my husband. I haven't seen him this pleased in many years."
"You aren't here with bad news regarding my husband, are you? I couldn't bear it."
"It's been a long time since I walked the ashlands of Vvardenfell. I miss it terribly."
"Perhaps our town isn't as grand as Mournhold, but it's our home and we must make the most of it."

Where are you from originally?
"Adril and I lived in Blacklight, the capital city of Morrowind. House Redoran has improved Blacklight substantially over the last thousand years... its grandeur rivals that of Mournhold itself. The Rootspire where the Council of Great Houses meet is something to behold."

It sounds like quite a sight.
"I haven't seen the city in over fifty years. Even for a Dunmer, that seems like an eternity."

Doesn't sound that impressive.
"Hmph. Well, beauty's in the eye of the beholder, I suppose."

Who's your husband?
"Adril Arano, Second Councilor of Raven Rock. How I hate that title... damn fool's going to get himself killed over it someday."
You worry much on your husband's behalf.
"He's in grave danger, and yet he continues to place himself in harm's way. When I fall asleep at night, all I can do is hope he'll still be there when I awaken. This island was never meant for us. There's too much death here."
Perhaps you should return to Morrowind.
"I assure you, if I could convince Adril to do that, I'd be on the next ship back to Blacklight. Unfortunately, Adril and Councilor Morvayn are very close friends, and they will never abandon one another... despite my feelings."
You haven't told him how you feel?
"I'm the wife of a Second Councilor and certain things are expected of me. The most important is that I stand by Adril, no matter how I feel. And I intend to do that until we get off this miserable rock."

When exiting conversation she will say: