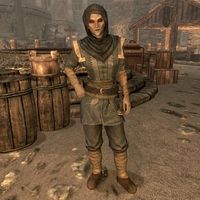 Mirri Severin is a Dark Elf living in Raven Rock. She is known as the daughter of Vendil and Tilisu Severin. Her family arrived in Raven Rock about ten years ago and have worked their way up to very rich and respected members of the community.

Mirri wears a blue Dunmer outfit with matching shoes. She carries a leveled dagger up to daedric quality, along with the key to the manor and a selection of upper-class items and gold.

If you are male, Mirri will be very flirtatious when first greeting you, "Mmm. Always a pleasure to watch when a man like you walks by." and continue with, "It gets lonely out here you know, on this remote island." The next set of greetings will appear regardless of your sex,"Oh, hello. You looking for a handout or something?", "My father and mother are the richest on the island... and that includes Councilor Morvayn." and "If you ask me, my father knows how to run things better than the Councilor." When asked if she wants to taste Geldis' sujamma, she'll be pleased, "Well, tell Geldis that Mirri says she really appreciates it." Should a beggar approach her in the market, she will be disgusted, "Ugh, get away from me." During Dragonborn, you may ask if she knows who Miraak is, to which she'll say, "That's not someone who lives in Raven Rock, I don't think... but it sounds so familiar." When asked what that means, she'll stay confused, and say, "Maybe... I can't help but think of some sort of temple here on the island. Why would that be?" When asked if she wants a job from Neloth, she immediately declines, saying, "Now why would I want to work for House Telvanni? Besides, Neloth is a madman!" When exiting conversation with Mirri, she will either flirtily say, "Don't stay away for too long." if you are male, or give you a standard "Next time, then." if you are female.

When in Severin Manor, Mirri will talk with the rest of her "family", revealing that their family is just a front for an unspecified job and that she and "her father" are actually lovers:

Vendil: "I'm worried. I think she knows."
Mirri: "She's jealous. Can't say that I blame her."
Vendil: "Have you taken leave of your senses? We could be exposed... ruined. Ten years of planning all for nothing!"
Mirri: "It's your choice, "father". Anytime you want to end it, you just give the word."

Mirri: "This town bores me. How much longer must we stay in this wretched place?"
Tilisu: "If everything goes well, we won't have to stay here much longer. For now, we wait."
Mirri: "What am I supposed to do until then?"
Tilisu: "I don't know, look for someone else to hop into bed with perhaps!"

Meanwhile, Vendil will get scolded by Tilisu for his relation with Mirri:

Tilisu: "What's wrong with you? Do you want to ruin everything?"
Vendil: "I don't know what you're talking about. I'm here to do a job, and that's it."
Tilisu: "I've seen the way you look at her. Do you take me for a fool?"
Vendil: "Look, "dearest", what I do on my own time is my business. You stick to your business and we'll both be fine." 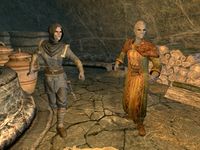 "Watch it Tilisu, I think we might have a visitor!"

When March of the Dead and The Final Descent are completed, you will be given a special task by Second Councilor Arano concerning an assassination plot. You will be sent to Ulen Ancestral Tomb where you must uncover the identity of an unknown visitor. You will eventually encounter Tilisu, in silent prayer near the central grave. After your investigation has been reported to the Second Councilor you will be sent to Severin Manor to gather incriminating evidence. Asking Adril about the Severins will make him tell you, "Tilisu is wife to the family patriarch, Vendil. They have a single child, a daughter named Mirri. They arrived here ten years ago, and have been nothing but a benefit to Raven Rock ever since." If you ask if there's anything unusual about them will make him mention Mirri's secret "People have mentioned it's a bit odd about how close in age Mirri appears to be to her father, but that's hardly a cause for alarm. Just make sure that you find solid evidence. If I accuse them without it, I'll be the laughingstock of the colony."

Once you're inside, you will notice that you're not alone. Tilisu and Mirri are both located within and should you get detected by Mirri, she will call out to her companion, "Watch it Tilisu, I think we might have a visitor!", she might also call out to you, "Stop hiding, coward. I'll make it quick, I promise." Should Tilisu be the one to detect you, she won't hesitate to call out to Mirri either, "Careful Mirri... someone's in here with us!" Should you get into a fight with Mirri here, she will angrily yell, "For House Hlaalu! For Vilur Ulen!"

Once you have collected your evidence, and returned it to Second Councilor Arano, he will send you to the final location, namely Ashfallow Citadel. Mirri will only appear here if she was spared earlier while searching through the manor. Together with several Morag Tong assassins, she will attempt to make a last stand in the citadel. This time Mirri is clad in a full set of Morag Tong armor. While attacking you, she will have some taunts that she shares with Vendil and Tilisu, "For House Hlaalu!" and "Morvayn will pay for this!" She also has some unique taunts, "Redoran-following dog!", "I'll scatter your ashes myself!", "Morvayn's reign is over!"

When you deliver the killing the blow, she will fall to the ground with her last words being, "No, it's not my time..." Upon her death, you will be able to loot the Severin Safe Key from her corpse.