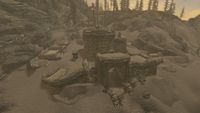 Ashfallow Citadel is an old Imperial fort, currently being used as a base of operations by the Morag Tong. It is found northwest of the Sun Stone and east-southeast of the Ramshackle Trading Post

The easiest approach is from the south. If you are coming here as part of the Served Cold quest, as you climb several flights of partially buried stairs you will find both Redoran Guards dead on the stairs and will be attacked by two Morag Tong Assassins. The Citadel consists of an outer wall in very poor condition, with large parts of it collapsed and partially buried in ash and a central tower with an unlocked wooden door as the entrance. There is a partially buried cart to the left of the door and a partially buried caravan wagon to the right. At the top of the stairs you pass under an arch in the wall. On the west side of the citadel there are two heart stone deposits and further around a scathecraw plant to harvest. It is possible to reach the top of the citadel by using the Whirlwind Sprint dragon shout and clever jumping, however there is nothing up there of worth or interest.

The entrance leads into a room partially filled with ash, debris and skeletons that can't be looted, on your left is a bookcase containing an East Empire Company strongbox. There are several skeletons, crates and damaged furniture among the ash, but nothing of interest. The wall to the west has been damaged and you can enter the small room behind on your right there is another skeleton that can be looted and a pair of random boots on the ground. To the east the path continues heading down a wide flight of curved stairs typical of Nordic forts.

At the bottom of the stairs there is a room on your left with a Morag Tong assassin standing guard. There are crates, boxes and barrels all around the room and against the east wall an unlocked chest. To the southeast past three barrels is a tunnel. It then turns to the south and ahead ends in a corridor that runs north-south. It is quite well lit by two chandeliers and is guarded by a Morag Tong assassin who is patrolling this corridor. A short way along the corridor you can see spikes blocking progress. There is an empty cart on your left and an open door on your right. A pillar blocks your view of the left side of the corridor. Moving forwards you will see a second doorway behind the pillar on the left. Any fighting with the first guard will alert a second from this doorway and also three further Morag Tong assassin's behind the spikes blocking the corridor. Be aware that Morag Tong assassins use invisibility to mask themselves-Detect Life or the Aura Whisper dragon shout are very helpful in these instances. At least one of the assassins that are behind the spikes will be an archer. You can use the open door on the right to shield yourself while killing all three of them with a bow, but ranged area magic will be blocked by the spikes.

Through the doorway on your right appears to be a barracks with six unowned beds and three sets of shelves. The shelves contain two pairs of Chitin Heavy Boots, two pairs of Morag Tong boots, an elven dagger, eleven random books, a pair of Morag Tong bracers, three sweet rolls, an iron dagger, a Morag Tong hood, two chitin heavy helmets, a set of chitin heavy armor, a set of Morag Tong armor, a randon enchanted steel dagger and an adept-locked safe. In the corridor, on the right just after the barrack room door against the west wall is another set of shelves holding nine more random books..

Through the doorway on the left of the corridor is an arcane enchanter and alchemy lab set on a table side by side. There are two random soul gems behind the arcane enchanter, one empty, one filled. Between this and the alchemy lab is an apothecary's satchel and two random healing, magicka or stamina potions. There is a small set of shelves on the left of the table holding a random healing potion, one empty and one filled petty soul gems, an empty random soul gem, a random common book and a bowl. Opposite is a cupboard set against the south wall holding six random books and an empty, and a filled petty soul gem. To the right of the cupboard are three barrels containing random ingredients. Between the barrels and the doorway is a pull chain that lowers the spikes and allows you to continue along the corridor.

Just after the spikes the corridor rises, and in front of you the corridor is blocked by interlocking spikes. To the right there is a Morag Tong assassin standing guard. At the top of the rise on your right is an unlocked wooden door. Through the door there are five bear traps and several barrels, at the end of a short corridor is a pull chain. This operates the vertical spikes that are blocking the main corridor. Just past this door on the left is another door leading to a sparring and martial arts training area, where three more assassins and Mirri Severin--(see notes) are working out. There are four chairs set around a raised central area that has three practice dummies and on one of the chairs is a random sword. At the back of the room against the east wall are a row of six weapon racks containing a random battleaxe and an enchanted elven mace. Just outside the door to the right is another pull chain, this one operates the horizontal spikes blocking the corridor and a barrel containing ingredients is just to the right of this. In the corridor opposite the sparring room, against the west wall is another cupboard containing an elven dagger and seven random books. To the left of the cupboard is a barrel containing more ingredients and several boxes and crates.

Past the second set of spikes there is a small set of shelves on your right holding four random books with an elven dagger on top. Past this there are pressure plates littering the floor that activate a series of three spike walls and several sets of spear traps coming out from the walls. The corridor is again blocked by spikes, there are two sets of them. The pull chains for both are off to the right, the first is on the rear of the first pillar and opens the second set of spikes, the second is on the rear of the pillar at the back and opens the first set of spikes.

This now opens the way to the final room, on your right before the room is a pull chain that closes a set of spikes behind you. Through a doorway into the final room, which is a large circular room with wooden planking covering deep water except for an open area in the center with stairs descending into the water. There are two Morag Tong assassins sat around the edge of the room and Vendil Severin and his wife, Tilisu Severin (see notes) are standing by a broken pillar. There is an unlocked boss chest opposite where you enter against the south wall behind Vendril. On the broken pillar are two rolls of paper. Under the water there are three skeletons that are floating around that can be looted for small amounts of septims or bone meal. There are also two skeletons opposite the entrance that are shackled to the wall under water, however these can't be looted and even opening the shackles does not release them.

You must exit the fort the way you came in as there is no shortcut exit.