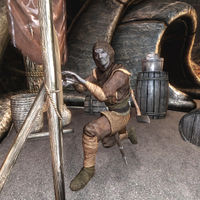 Fethis Alor is a Dark Elf farmer living in his house at Raven Rock. He is a general goods merchant who will sell various types of items, and requests that you locate East Empire pendants for him. He has a daughter named Dreyla, who helps him run his shop.

Fethis wears a Dunmer outfit with Dunmer shoes, and he carries a steel dagger, a key to his house, and a selection of common items and gold.

He gets up early, at 6am, to eat a two-hour breakfast with his daughter in his house. Then at 8am, he heads out to his stall and works for twelve hours. At 8pm, he will close the shop and heads to the Retching Netch to drink for four hours. At midnight, he either heads to the Earth Stone, to work for six hours, or if the stone has been cleansed, he heads to his house to finally go to sleep.

"Want to buy anything, or just laugh at our misfortunes?"
"I'd be on the first ship off of this island if I had the coin. What a waste."
"If you're looking to buy, then I'm looking to sell."
"Yeah, so. What can I get you? Got everything from potions to pitchforks."
"It's busier now that things are starting to look up. I guess I might stay a bit longer after all." (If you've helped Raven Rock get back on its feet)

"Being freed from building the shrine... I don't even know how to begin to thank you."

If he is at the Earth Stone when it is cleansed he will say:

"If I could only get my hands on Miraak. I'd make him pay for playing with my mind."

What exactly do you sell here?
"The question you should be asking is "what don't I sell here" because I have pretty much any supplies you might need. If it's not a weapon, potion or armor, then it's likely that I have it."

Where did you get all these items?
"Gjalund over at the docks brings me most of my supplies, and the rest comes from bartering with the people in town. Oh, Glover Mallory gets me a few things once in a while. He usually has the most amazing deals that I can't pass up."

Are sales that bad out here?
"Bad? What if I told you that you're the first person that's even considered looking at my wares today. I've half a mind to contact my friends at the East Empire Company and see if they need an extra hand in Windhelm."

Okay.
"Bah, you're just like the rest of the folks around here. Mark my words... the East Empire Company will return to Raven Rock, and when they do, I'll be at the top of their list."

Once the mines are reopened:

How are things now that the mines are open again?
"Things are picking up... for now. All I'm wondering is how long it'll take for House Redoran to begin ignoring us again if the mine runs out of ore for a second time."

When exiting conversation, he may say:

"If you need any supplies, you know where to find me."

When asked about the shrine outside of town during Dragonborn:

Do you know someone called Miraak?
"I think maybe I had a dream about someone with that name..."
Tell me about your dream.
"It was very strange. Was I… building something? A shrine, down on the beach near the Earth Stone? I'm not sure."

It's All In the Taste[edit]

When asked if he wants a drink from Geldis, he'll gladly accept:

Geldis Sadri wants you to try his new drink.
"Geldis needs to bottle this up and send it to the mainland instead of wasting his time out here... his drinks are outstanding. Thanks."

If you ask him if he wants to be Neloth's steward, he'll immediately decline but point you in the right direction:

Do you want to be the new steward of Tel Mithryn?
"Don't be ridiculous. Who would run this place? You should ask around at The Retching Netch. Someone there might be crazy enough, or drunk enough, to do it."

Do you sell any special mining gear?
"Mining gear? No. However, I used to sell East Empire Pendants until I ran out of them. Popular little item."
What's an East Empire Pendant?
It's an amulet that was made exclusively for the East Empire Company. They gave them to their workers as an incentive at one point... a kind of reward for extra effort. They're no longer being made, so they've become collectible. I'd love to get my hands on a few of them."
Where can you find them?
"They could be anywhere on the island. The mines might be a good place to start. If you find any while you're exploring Solstheim, bring them here and I'll pay you for them."

When you bring a pendent for the first time, he'll say:

"Well, well. Seems you're proving fairly useful for an outlander. Here's your coin. Keep bringing me more, and I'll keep paying you for them."

After that, when you turn pendents in he can say:

Still buying East Empire Pendants?
"I'm beginning to like this partnership. Here you go."
"As long as you keep bringing them, I'll keep buying them."
"You're making my buyer happy. Keep them coming."
"I am. Here you go."
"Absolutely. Here's your payment."

During this quest, he may remark when exiting conversation:

"The East Empire Pendants are scattered all over, so leave no stone unturned."

He can often be seen conversing with other Raven Rock citizens:

Fethis: "I never got a chance to thank you for everything you've done. Ever since your mother died..."
Dreyla: "You don't need to say anything, father. I miss her too."
Fethis: "Had we only left a day earlier... she'd still be with us. It's my fault she's dead."
Dreyla: "It was her time, father. None of us have any control over that. You mustn't blame yourself."

Fethis: "Dreyla! I told you I didn't want you seeing him anymore. Must I lock you into the house at night?"
Dreyla: "Father, Captain Veleth and I are in love. He means everything to me. Am I to simply ignore my own heart?"
Fethis: "He's twice your age and only wants to marry into our family to use my contacts at the East Empire Company. No, I won't allow it."
Dreyla: "Your precious "contacts" have yet to conjure up a scrap of food or work for us, father. Don't make me choose, father... I beg you!"

Fethis: "I want you to stay away from my daughter!"
Veleth: "What Dreyla chooses to do is her concern, not yours."
Fethis: "She has no idea what she's getting herself into. You may not always be there to take care of her."
Veleth: "Fethis, all of us mourn your wife's passing. Just don't let it affect how you treat your daughter."

Fethis: "Geldis, I want you to let me know if you see Dreyla with Captain Veleth. I don't trust him."
Geldis: "She's not a little girl anymore, Fethis. When are you going to let her go?"
Fethis: "He's twice her age and they barely know each other. You expect me to ignore them?"
Geldis: "Raven Rock doesn't offer much in the way of companionship. You should be happy for her."
Fethis: "How about you keep serving the drinks, and I'll decide what's right for her!"

Milore: "How's business today, Fethis?"
Fethis: "Haven't sold much. It's going to be a long time before things ever get back to the way they were... if ever."
Milore: "Have faith. Things will change for the better."
Fethis: "Thanks, Milore. I appreciate that."

Fethis: "Milore, I've finally gotten that letter back from the East Empire Company."
Milore: "Gods. Not this again."
Fethis: "What's that supposed to mean?"
Milore: "Fethis, they doesn't care about us. If they did, we wouldn't be standing ankle-deep in ash trying to sell a few meager trinkets to survive. They just send you those promises to keep you off their backs... you must know this."
Fethis: "Sorry, I... Never mind."

Glover: "Fethis! How's that pretty young daughter of yours doing?"
Fethis: "What in the name of the Black Hands is that supposed to mean?!"
Glover: "Nothing... I... I was just making conversation."
Fethis: "Next time you feel like having a conversation, talk to someone else."

Fethis: "Mogrul... I got those special poisons you asked for."
Mogrul: "Why don't you say that louder so the entire town can hear you, idiot. Just give them to me and put it on my account."
Fethis: "About your account... it's been a few months..."
Mogrul: "I said to put it on my account and that's the end of it. Understand?"

Fethis: "Adril, a word please."
Adril: "Fethis, I'm quite busy at the moment..."
Fethis: "Why hasn't a Redoran Guard been posted at my shop like I've requested?"
Adril: "You and I both know we can't spare anyone right now. I don't care if you still have friends at the East Empire Company or not. They abandoned us long ago, so your contacts are meaningless here. That's it." 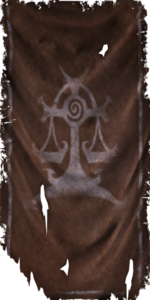 This is the merchandise found in Fethis' Merchant Chest. These items are only available if purchased from the merchant; they cannot be pickpocketed or stolen. They are restocked every two days.

The random books he sells are chosen from one of the following lists.