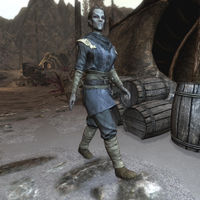 Dreyla Alor is a Dark Elf farmer living in Raven Rock, although she hates Solstheim, as her time is spent trying to eke out a living at her shop. She wants to return to Morrowind, but doesn't want to leave her widowed father, Fethis. Her mother died during an Argonian raid, along with nearly everyone else in their town, as they lived only a league from the border with Black Marsh. She is in a relationship with Captain Veleth, but must visit him secretly because her father does not approve.

Dreyla wears a Dunmer outfit with Dunmer shoes, and she carries a steel dagger, a key to her house, and a selection of common items and gold.

She gets up at 6am to have a two-hour breakfast with her father. At 8am she leaves the house and goes over to The Retching Netch to drink for two hours, together with her lover, Captain Modyn Veleth. Once she gets done drinking, she decides to go browsing at the marketplace for 7 full hours before returning to drinking at the Netch for 4 more hours. Afterwards, she returns to her house to wander around some more and at midnight, she either heads to the Earth Stone, to work for six hours, or if the stone has been cleansed, she heads to bed.

When you first meet her, she'll show just how much she likes Raven Rock, saying, "Miserable... just miserable. I hate this place.", "This island's nothing but a pile of rubble. What's the point trying to make a life here?" or "You stuck in Raven Rock too? Horrible isn't it." She might also recommend you visit her father, saying, "If you're looking to purchase something, speak to my father, Fethis." Once she's free from Miraak's control, she'll say, "I can't believe that I was building that shrine at night... I never knew." If she is located at the Earth Stone when it is cleansed she will either say, "I know you risked a lot freeing me from Miraak's control. Thank you!" or "What if Miraak decides to make us do something else next... like kill someone we love. I can't bear the thought!" If you've helped Raven Rock get back on its feet, she'll be very grateful, "The mines are open and the shop is busy again. Thank you!"

If you ask her if she doesn't like Solstheim, she will angrily respond, "Don't like it? I hate it! Every day it's the same thing. We open the shop, we hardly sell a thing, we close the shop and go to sleep. What kind of a life is that?" You can now ask her why she doesn't just return to Morrowind, to which she'll explain how she can't leave her father, "Oh, believe me... I'd be on the first ship off of this miserable island if I could. But I'm not sure I could do that to my father. I think it would break his heart. We've already lost my mother, I don't want to leave him alone." You can now elaborate even further and ask her how her mother died, to which she'll say, "We lived in a settlement perhaps a league from the border of Black Marsh, the homeland of the Argonians. Even though the Argonian Invasion ended a long time ago, there are still a few scale-skin clans that live within our borders. To put it simply, they attacked our settlement and slaughtered almost everyone. It was horrible." When asked about the shrine outside of town during Dragonborn, she'll reply confused, saying, "There's a shrine there, but I'm not sure what it means..." When asked if she knows more about the shrine, she'll act perplexed, "Why can't I remember? I was sure it was important." When asked if she knows someone named Miraak, she'll be unsure, saying, "I think so, but I'm not sure where I heard the name." When asked to elaborate, she'll stay lost in thought, "I don't know why, but I'm thinking about a temple, here on the island. Maybe it was just a bad dream." When asked if she wants a drink from Geldis, she'll gladly accept, at the same time having a go at her father, "At least my father will let me drink whatever I want without complaining. Tell Geldis I appreciate it." f you ask her if she wants to be Neloth's steward, she'll immediately decline, saying, "My father needs me. He can't run his market stand alone. Besides, Neloth is as loony as a skooma addict. He wanted my father to import a white mammoth. Alive!" You can then ask her if she knows anyone who might take the job to which she'll say, "You could try Drovas Relvi. He came in here asking my father if he needed any odd jobs done. Seemed kind of desperate." When exiting conversation, she may give you a valuable piece of advice, "Keep yourself safe... Solstheim's still a dangerous place."

She can often be seen talking with either her father, Geldis Sadri or Captain Modyn Veleth, her lover.

Fethis: "I never got a chance to thank you for everything you've done. Ever since your mother died..."
Dreyla: "You don't need to say anything, father. I miss her too."
Fethis: "Had we only left a day earlier... she'd still be with us. It's my fault she's dead."
Dreyla: "It was her time, father. None of us have any control over that. You mustn't blame yourself."

Fethis: "Dreyla! I told you I didn't want you seeing him anymore. Must I lock you into the house at night?"
Dreyla: "Father, Captain Veleth and I are in love. He means everything to me. Am I to simply ignore my own heart?"
Fethis: "He's twice your age and only wants to marry into our family to use my contacts at the East Empire Company. No, I won't allow it."
Dreyla: "Your precious "contacts" have yet to conjure up a scrap of food or work for us, father. Don't make me choose, father... I beg you!"

Geldis: "Dreyla, I have a message for you."
Dreyla: "Tell my father if he wants to speak to me, he should do it in person."
Geldis: "It's not from your father. It's from Captain Veleth."
Dreyla: "Oh my goodness, I'm so sorry, Geldis! Please, tell me... what did he say?"
Geldis: "He said he'll meet you where you met for the first time. He said you'd know what it means."
Dreyla: "I do! Thank you."

Dreyla: "I don't know if I can do this anymore, Modyn."
Modyn: "Is it because of your father? Or is it me?"
Dreyla: "He's never been the same since my mother died. I don't think he ever wants me to feel the pain he suffers."
Modyn: "At some point, you're going to have to choose. No matter the outcome, I'll always respect your decision."