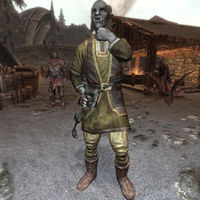 Mogrul, with bodyguard behind him

Mogrul is a money-lending Orc warrior who can be found in Raven Rock. He often spends his time in the marketplace next to Fethis Alor by the well. His bodyguard Slitter can be found nearby, watching over him. He can be heard demanding money owed to him by Garyn Ienth, and collecting poisons on credit from Fethis Alor. He comes to collect the 1000 gold owed to him by Drovas Relvi after you help him leave town to become Neloth's new steward. At noon, he goes to The Retching Netch to have lunch until 2pm.

Mogrul wears a set of tavern clothes and a pair of boots. He carries an Orcish War Axe of Devouring and a selection of common items and gold.

Mogrul may greet you by saying:

"I'll give you this warning only once. Stay out of my way, and we'll do just fine."
"If you're dealing with me, there's only one thing to remember. Pay your debts or end up hurt."
"I might lend coin to people that need it, but I never lend to strangers. So shove off."
"I don't know you, and the last thing I want is a stranger with his/her nose in my business. Go away."
"I can tell you don't like me. Well guess what. I don't give a damn."

You have the option of asking him if he'd like to be Tel Mithryn's new steward. He laughs at you mockingly for suggesting that and responds, surprised that anyone would consider such a thing.

Do you want to be the new steward of Tel Mithryn?
"Ha, ha, ha! Not on your life!
I'd have to be truly desperate to do that."

You will need to deal with the debt you inherited from Drovas Relvi after Reluctant Steward. The following is a table listing your choices when Mogrul asks for you to make the payment, and his responses to each.

You can deal with the debt by paying it off or killing Mogrul.

You can ask him about Miraak during Dragonborn.

Do you know someone called Miraak?
"No. Wait... I recognize the name, but I'm not sure why."
What does that mean?
"I don't know... I feel strange just thinking about it. A temple, maybe? Here on the island? Something about a temple..."

You have the option of asking him to try Geldis Sadri's new sujamma. Unfortunately, he won't be very receptive to the idea.

Geldis Sadri wants you to try his new drink.
"Take that swill and pour it down a well."

Mogrul may be seen having some conversations with other merchants about their unusual deals at the market, as well as arguing with the local innkeeper. He can be seen confronting Milore Ienth about her husband Garyn's debts.

Mogrul: "Milore, you need to talk some sense into your husband."
Milore Ienth: "You can't get blood from a stone, Mogrul. As it is, we can barely make ends meet."
Mogrul: "That isn't my problem. I was clear when I loaned Garyn the money that I wanted it back by the first harvest."
Milore Ienth: "I'll see what I can do..."

He also confronts Garyn about the debt directly.

Garyn Ienth: "Oh... Mogrul. Care for anything from my stand today?"
Mogrul: "Ash yams? Disgusting. I'd rather eat cheese that's been sitting in the sun for a week."
Garyn Ienth: "Look, I know why you're here. I'll get the coin, I promise."
Mogrul: "If you want that beautiful wife of yours to stay that way, you'd better."

He can be seen approaching Fethis Alor's shop to pick up some poison.

Geldis Sadri: "Mogrul, I thought I told you I didn't want you hanging around here."
Mogrul: "Yeah, I heard you before. I just don't care. You won't kick me out of here, and we both know it."
Geldis Sadri: "Look, we've been over this. I paid you off, I don't owe you a thing."
Mogrul: "And I'm supposed to run my operation outside in a pile of ash? I don't think so. I'm not asking you if I can stay, I'm telling you. Now that's the end of it."