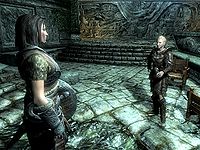 Delphine inducting Lydia into the Blades

After completing Alduin's Wall, you may notice that the Blades' mission of ridding Skyrim of dragons may be rather daunting for just two people. Ask Delphine about her apparent staffing shortage and she will reply, "The Thalmor hunted us down, remember? It wasn't exactly great for recruitment. But we have a headquarters of a sort now. We'll rebuild the Blades. Someday." As you are the Dragonborn, and the Blades are sworn to protect you, you might be inclined to help Delphine find new recruits. When you offer, she will say, "If you find anyone you think would make a good recruit, I can certainly take a look at them. Remember, though, being a Blade is a lifelong commitment. Their loyalty has to be with us once they're in."

To recruit a follower into the Blades, simply bring your new recruit to Delphine in Sky Haven Temple for introductions. Since being a Blade is binding, Delphine will ask you for confirmation: "Are you sure? I'll need to ask them to take an oath to leave their old life behind and stay here from now on." Confirm your selection and Delphine will agree. She will then give the oath to your first recruit:

You can bring two more recruits to Delphine for the oath taking. After the third, she will say "That's enough recruits for now. Ask Esbern about the dragon lairs he's been studying. We'll have the recruits do some hunting with you." Speak to Esbern to complete the quest and begin the Dragon Hunting repeatable quest.