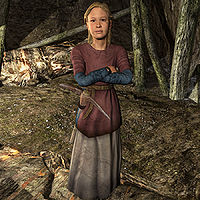 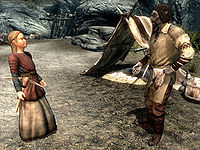 "Do you ever want to go to Morrowind, Sondas?"

Hrefna is a Nord child who lives with her mother Tormir at the small mining settlement, Darkwater Crossing.

While her mother is mostly preoccupied working in Goldenrock Mine, Hrefna leads a lonely life in the settlement, although Sondas Drenim has taken up the role of caretaker. She starts the day at 7am with a one-hour breakfast, then follows her mother into the mine where she watches her work for four hours. When Tormir surfaces for a break at noon, Hrefna follows her and waits by the campfire until 1pm when she locates Sondas inside the mine. At 5pm she returns with Sondas to the campfire where she spends the rest of the evening. She was supposed to crawl into one of the tents at 10pm for eight hours of sleep, but doesn't due to a bug.

She wears red-colored child's clothes and a pair of shoes. She is equipped with a pickaxe, and carries a selection of food and toys, as well as a small amount of gold.

Hrefna will be very happy to talk with you and will mention most of the other inhabitants of the settlement when spoken to:

"Hi! I've never seen you around here before. Are you a miner too?"
"Sondas takes care of me when mom's not around."
"Derkeethus used to take me diving way down deep in the river. I miss him."
"Mom says the Empire is mean, but I don't think they're that bad."
"The Stormcloaks are named after Ulfric. He's a bad man, but don't tell the soldiers that."

Hrefna often talks to her mother or Sondas:

Hrefna: "And Meieran thinks that we should go there."
Tormir: "I don't want to hear another word about what you're learning from the elf! It's high time you learned to be a Nord, too!"
Hrefna: "But mama..."
Tormir: "He's a half-decent farmer. Ask him to teach you to farm!"

Hrefna: "Sondas, I've heard about Morrowind."
Sondas: "Oh? What about it?"
Hrefna: "That it was black and gross and nobody wanted to live there anymore."
Sondas: "I'll have to take your word on that one, my dear."

Hrefna: "Do you ever want to go to Morrowind, Sondas?"
Sondas: "I've been in Skyrim my whole life. Why would I want to leave?"
Hrefna: "To see the fires!"
Sondas: "I think I like the lake here just a little more."