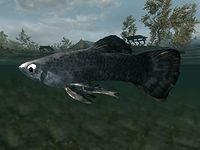 Abecean Longfin are fish that can be caught in ponds, lakes, and other bodies of water. The best way to find them is to look for dragonflies above the water, as longfins will usually be right beneath them. The ingredient is named "Abecean Longfin", but the fish is misspelled as "Abacean Longfin".

In terms of combinations of two ingredients, Abecean Longfin can be combined with 31 other ingredients.

It is categorized as a common ingredient, meaning that all apothecary merchants have a 36% chance of carrying 1-5 samples. In addition, it may be randomly found in some barrels and apothecary's satchels. Other possible locations for already-harvested samples include: