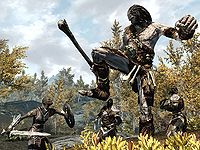 A giant attacking the Orcs at Largashbur

The Orc camp is located in The Rift southwest of Riften. As you approach the town for the first time, a giant will be actively attacking the Orcs at the gate. It's advisable to hurry in and help distract the giant, as it will kill unnamed Orcs left and right and may kill potential followers such as Ugor. After defeating the giant, Ugor and a caster named Atub will begin bickering. Atub will apologize to you and explain that their tribe and leader have been cursed. She has a ritual that may be able to remove it, but needs a bowl of troll fat and a daedra heart to perform it. She'll ask you to retrieve them. Details on where to find them are provided on their individual pages, however the closest place to get both items is in the Jorrvaskr Living Quarters in Whiterun. 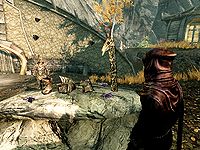 After you bring the ingredients to Atub, she will enter Largashbur Longhouse and speak with Chief Yamarz about performing the ritual. The Chief isn't thrilled about the ritual, but ultimately agrees to follow her out to the altar. Atub successfully reaches Malacath, whose disembodied voice berates Yamarz for his weakness, abhorring Yamarz for being so weak that even giants openly attack his stronghold. Malacath demands that he kill the giant's leader and return with his club as an offering. Yamarz is irked and demands your assistance in his task, promising lots of gold for helping him. 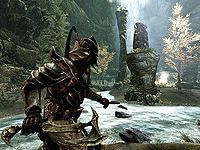 Yamarz will run off towards Fallowstone Cave. If you fast travel there you'll meet him at the entrance and avoid the long trek. He leads the way through the cave, which is remarkably spacious, but rather straight forward. Bears and trolls dwell in the cave and pose some threat, but the giant in the huge main chamber should be far enough away to be avoided entirely. Yamarz will charge down several ledges following the flow of a stream to a pool on the lowest level. He will continue to follow the stream deeper into the cave out of the main chamber and into a smaller cavern occupied by a second giant that can't be so easily avoided. Continue down the tunnel to the southeast as it wends it's way around to a final small chamber littered with bones, likely from the predation of the two bears that make it their home. After dealing with them, follow the quest marker up the path to the left and out to Giant's Grove.

Once in the grove, Yamarz will offer to pay you even more gold if you kill the giant yourself and let him take credit. Either way, you're left fighting the giant in a very small area.

After defeating the giant, the only way out is back via Fallowstone - only this time you get to the entrance via a long ledge. Just after you enter back into the cave, take the tunnel almost immediately to your left, and follow the ledge round to the left, past the locked chest (unlock and loot, if you've not done so already). Keep going until you see the waterfall ahead of you, then jump down and cross the stream just in front of the waterfall, then follow the route back to the cave entrance. 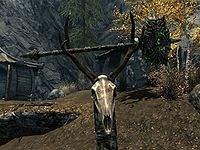 Once you return, speak with Atub and tell her of Yamarz's fate. Malacath will speak once more, naming Gularzob the new chief. He will command you to place Shagrol's Hammer on the shrine, where it transforms into the fearsome Volendrung, the Hammer of Might. Make sure you take it from the shrine where it rests in the skull's antlers.