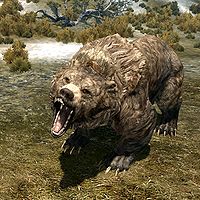 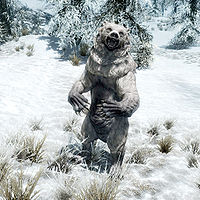 Bears are large, hostile enemies that will attack if you are found infringing on their territory. They live either in the wilderness or in their cave lairs. Bears carry the disease Bone Break Fever, which deducts 25 points from your stamina if you contract it while fighting one. Fortunately, bears will always roar or growl in an effort to intimidate potential threats before attacking, and thus are fairly easy to avoid if you wish so. Standard bears and the larger cave bears are encountered throughout Skyrim and SolstheimDB, while the mighty snow bears are largely confined to high altitudes and snowy regions.

Bear carcasses can be harvested for their pelts (for tanning) and their claws (for alchemy).

^1This variant of bear is summoned by the spell Pride of HirstaangCC.

With the installation of the Hearthfire add-on, you have the ability to create bear statues in the trophy room addition of any homestead, should you choose to build it. Available options include a regular bear standing on its hind legs, and a snow bear growling, both on a large base. The materials needed for each option are: