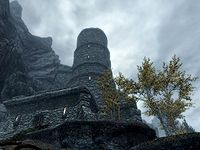 Darklight Tower is a tower occupied by hagravens. It is located southwest of Riften, east of Largashbur.

Various species of common mushrooms can be found throughout the area, including white cap, imp stool, fly amanita, blisterwort and bleeding crown. The interior of the tower is dark and ruined, and contains many hags and witches along with frostbite spiders and/or skeevers.

The path leading from the road between Riften and Ivarstead is unmarked and difficult to spot and is inhabited by many leveled animals. As with the majority of the area in this part of Skyrim, there are numerous mountain flowers and many other plants that can be harvested for use in alchemy both along the path and near the tower. The tower itself is a dilapidated fort with a large buttressed outer wall and a walkway along the top. An arch leads into a courtyard with several flights of stairs leading up to the entrance. As you approach, impaled goat heads and polished mammoth tusks betray the nature of the occupants inside.

The first floor is the ruined entrance to the tower. Upon entering, you will see a woman named Illia battling a witch in the second room. Once the witch is defeated, Illia will speak to you and ask you to assist her in stopping her mother from becoming a hagraven. There is an adept-locked door to the northeast with an unlocked chest and a couple of barrels of food behind it. Illia carries the key to open the door. Aside from that, there is nothing of note on this floor. Against the south wall a candlelit stairway climbs further up the tower.

At the top of the stairs is a balcony that overlooks the room below and circles to the west. There are two creatures in this area, one of which is leveled. At the far end of the balcony is a wooden door leading into a room with a hag who will attack as soon as you or Illia enter. To the right of the southern stairwell is an alchemy lab with a round wooden table beside it holding a random potion of healing, a random poison, an iron dagger, and a random empty soul gem. There is also an unlocked chest hidden under an overturned table in the northwestern corner.

The stairs lead up to the third floor, a two-tiered space containing several rooms that make up the living quarters of the witches in the tower. There is a leveled creature and a witch on this floor. There are two raised sections of flooring linked by a bridge, with stairs leading up to the larger platform opposite the door you entered through. At the top is an area with doorways to the both north and south, both of which are blocked by raised spears. A lever is located behind the southern door. The furniture in this room includes four unowned single beds, a table holding a charred skeever hide and a portion of grilled leeks, and a variety of overturned furniture. The smaller of the two platforms contains a visible spike wall trap that is triggered by a pressure plate, a cupboard holding a random potion, and a random potion of healing with a filled random soul gem on the ground in front of it. There is also a table with a metal pot in the middle containing a sprig of snowberries and two bulbs of garlic.

Beneath this area is a corridor heading west, which Illia will take. The corridor turns south after a few paces before passing a thick patch of cobwebs that conceal an unlocked chest on the right. The corridor continues and then turns east. There is a wooden door that is locked and requires the key carried by Illia. Behind the door is a cupboard holding a random potion of magicka, two random potions of healing, one of stamina, and one other random potion. There are also three food barrels in the corner and two sets of shelves holding only clutter. The corridor continues east and up some stairs into another room containing a large fireplace. The room also contains a lever beside a set of spears blocking a doorway. This is the southern of the two sets of spears seen previously. The lever lowers both sets of spears. Illia will warn you that there is a hagraven ahead.

There is a flight of stairs behind the northern spears with a closed wooden door at the top. The door leads to a room with a hagraven and two creatures. The hagraven will be opposite the door behind a table in her tent. She prefers to attack with Firebolt. On the table is a hagraven claw, a random filled soul gem, a copy of the Illusion skill book 2920, Sun's Dawn, v2, and a steel dagger. The usual hagraven decor (impaled goat heads, etc.) surrounds the tent. To the left of the tent is another unlocked chest, while the ground in front of the table contains two pheasants that appear to have fallen from a rack above. To the right of the door you entered through is a flight of stairs that have caved in. There is a skeleton among the rubble that can be looted, while to the north is a wooden door leading to the next zone, Darklight Chambers.

Beyond the door is a curved flight of stairs that leads up to a circular room with large wooden stakes in the middle and a hag and a witch standing next to them. Among the stakes is a dead bandit. Once the enemies have been dealt with, Illia will approach a master-locked door to the south and exclaim that the door is locked. She will suggest taking the key from one of the hags nearby or just picking it. To the east is another corridor leading up to a door.

The hagraven with the key is located in the next room, a multi-tiered hagraven lair that also contains a hag. There is a short hallway lined with damaging spikes, with stairs leading up to a floor with a hag standing by an unlocked chest. The hagraven is across a bridge to the south. More stairs lead up against the north wall to another level with a master-locked chest and a cupboard holding three random potions of magicka and two random poisons. Crossing the bridge and climbing another flight of stairs leads to a table with a random empty soul gem, an iron dagger, and a salt pile on top.

Beyond the master-locked door is a corridor which leads to a flight of stairs. The stairs lead to another corridor containing two food barrels and ending at a small room with a leveled hag. This room contains a small table holding an iron sword with a set of shelves against the west wall. On the shelves are two bottles of wine, a random potion of regeneration, and two potions of magicka. Against the north wall is an arcane enchanter, while against the east wall is another unlocked chest. The only other item of interest in the room is an unowned bedroll in the middle of the floor. A damp corridor climbs north from here, before turning west and opening out onto a balcony above the room with the wooden stakes in the middle. There are two leveled creatures and a hag on the balcony. In the middle of the balcony is a cupboard holding a random potion of resist magic and a leveled potion of magicka, while the edge of the balcony contains a table holding a copy of the Destruction skill book Mystery of Talara, v3, another random filled soul gem, and a bottle of wine. Past these are stairs curving up around the tower. At the top of the stairs, there is a square table holding an iron dagger and a wooden door leading outside, where Illia's mother Silvia waits to perform her dark ritual.

Exiting through the door leads onto a walkway that passes under an arch into a courtyard behind the tower. The area outside the tower is full of hagraven totems, including various animal heads on stakes, mammoth tusks, taproots in netting, two sets of large ribs, and a pair of large antlers made to look down from on top of a rock. Silvia is a fairly adept caster and carries the unique Staff of Hag's Wrath. Once she has been dealt with, make sure to loot her body. There is a campfire next to a table holding a copy of the Destruction skill book Horror of Castle Xyr, two random poisons, a leveled filled soul gem, and a steel dagger. Inside her tent is an unlocked, leveled boss chest. At the rear of the courtyard is an arch blocked by spears that are lowered by activating a lever to the left, while to the north are stairs leading up to the top of the surrounding walls and two towers, one of which is ruined.

Passing through the gate and following the path to the east will bring you to the Ruins of Rkund. If you take the path west from the gate, you will find the collapsed entrance to an unmarked Nordic barrow. A troll has taken up residence here and guards an unlocked chest and a couple of urns that can be looted.