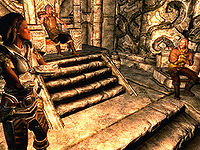 Igmund is a Nord barbarian who rules the city of Markarth as jarl with assistance from his steward and uncle, Raerek. He is supportive of the Imperial Legion in the current civil war. If the Stormcloaks take control of the hold, he will be replaced as Jarl by Thongvor Silver-Blood.

When discussing the city's history under his father's leadership, Igmund reveals that when Cyrodiil was invaded by the Aldmeri Dominion during the Great War, the Empire began ignoring all other provinces and were forced to deal exclusively with the war. Because of this, the Imperial Legionnaires in Markarth were recalled, leaving the city vulnerable to the impending Forsworn rebellion. With no Legion to assist the besieged city, it fell temporarily and created a brief "independent kingdom." After the Great War, the Empire sought to reclaim the Reach. With no other options, Jarl Hrolfdir entrusted a militia led by Ulfric Stormcloak to reclaim the Reach, offering them religious freedom in exchange for their aid in overthrowing the independent Forsworn empire. However, the Thalmor discovered this, and demanded the arrest of Ulfric and the other members of the militia, since they were in violation of the White-Gold Concordat.

The Thalmor placed political pressure on Igmund's father, effectively forcing him to turn over Ulfric, in order to preserve the new-found peace the Empire had with the Dominion. Igmund followed in his father's footsteps when he became the new Jarl of Markarth, after the Forsworn murdered his father, and he firmly believes that the arrest of Ulfric and the Nord militia was in the best interests of Skyrim and her people, in order to prevent another war with the Thalmor.

Igmund wears embellished robes, a pair of fur-lined boots, and a copper and sapphire circlet. He is equipped with a steel sword and a steel shield, and carries a selection of upper-class loot and gold.

He can be overheard discussing the topic of Forsworn:

Igmund: "Raerek, how is The Reach faring against this Forsworn menace?"
Raerek: "Things are bad, Igmund. Our forces are barely able to keep the Forsworn in check. Merchants are reporting the loss of more of their shipments."
Igmund: "This is why I say we take the fight to them. Gather the Legion and drive those blasted beasts out of the Reach for good."
Faleen: "And what do Legion soldiers know about the hills the Reach? And the caves that make up those hills? The Forsworn can hide and ambush every assault."
Raerek: "The safety of the city and our settlements must be our only concern, Igmund. The rest of the Reach is on its own."
Igmund: "Cowards, the both of you. My father would not sit idly back and wait while evil men take over his lands. We're done discussing this for now."

He can be overheard discussing the topic of Markarth trade:

Raerek: "My Jarl, we need to discuss Markarth's collapsing trade with the other Holds."
Igmund: "Of course there's a collapse in trade. The Stormcloaks stalk every road and the Forsworn attack every caravan."
Faleen: "Not to mention the rebels completely control Windhelm and all of Eastmarch hold."
Igmund: "Why do you pester me with battles we can't win? I need my steward to plan for victory, not nag me with every ill account."
Raerek: "Forgive me for worrying about the future of Markarth. The lifeblood of the city is gold, Igmund, and it doesn't stop beating because there's a war on."
Igmund: "Very well. I'll send the request for additional Legionaries to protect trade to the other Imperial holds. Hopefully, Solitude can spare more men."

He can be overheard discussing the topic of Silver-Blood family with Raerek and Faleen:

Raerek: "Igmund, we need to talk about the Silver-Blood family."
Igmund: "What about them? They seem loyal enough."
Raerek: "Loyal? Thongvor supports Ulfric and his Stormcloaks! We should imprison the entire family as a precaution."
Faleen: "I second that, Igmund. Who knows what that family will do for power? They could be working with the Forsworn for all we know."
Igmund: "Enough! We can't imprison the very people who own the jail we would be throwing them into. The Silver-Bloods are to be left alone, am I clear?"
Raerek: "Yes, my Jarl."
Faleen: "Yes, my Jarl."

In a cut part of the Stormcloak questline, there was going to be a siege of Markarth that was much like the Battle for Whiterun. Upon reaching the throne room, you would be greeted to this exchange:

The battle would conclude with this exchange between Igmund, Thongvor, and Galmar:

This Skyrim-related article is a stub. You can help by expanding it.
Retrieved from "https://en.uesp.net/w/index.php?title=Skyrim:Igmund&oldid=2447209"
Categories:
Hidden categories: