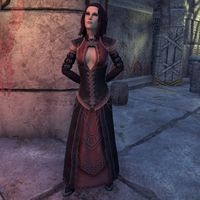 Lady Belain is a noble that presents herself as a Breton (see note below), and is the advisor to Ard Caddach.

Belain has a mysterious unknown past. Ard Caddach implies that Belain was not chosen as his advisor but she rather ingratiated herself to the court. Even her condition as a vampire is unique as she is able to hide her true nature even from other vampires. When Count Verandis Ravenwatch is asked about this, he says that he "... sensed something else inside her. A vacant darkness".

Before you are granted an audience with Ard Caddach, she will say:

"I am an advisor to the throne of Markarth and a confidant of Ard Caddach.
You...are not."

If you speak to her before approaching Ard Caddach:

"If the sentry allowed you to enter the throne room, you must have news to share with Ard Caddach. So why are you talking to me? Making the ard wait is … unwise."

"I couldn't help but overhear. Ard Caddach's voice, it carries.
Now tell me about the leader of the witch-rebels. The name you provided. Arana, I believe you said."
Yes. Ard Caddach asked me to help you find her.
"Therein lies the problem. Reach witches are experts at losing themselves in the many caves and copses that decorate the landscape. It's like finding a tooth in a hen's beak.
Most witches give deference to the ard. Arana … is a troublemaker."
So Ard Caddach wants you to find her?
"Actually, that task falls to you. A favor for a favor, yes? That's how business works here.
Locate the rebels. Find Arana and urge her to stop meddling in Markarth's affairs. Do that, and you shall earn a place for you and your count in the Reach."
I'll find Arana.

You can ask her more questions after accepting the task.

"That look on your face. I know curiosity when I see it. Very well. I can spare a few more moments before sending you off on your task.
What does the outsider in Ard Caddach's court wish to know?"
You look as out of place in this court as I do.

"While I may not have been born and raised in the Reach, I have earned my place as friend and counselor to Ard Caddach.
His subjects call me a keep-witch. I assure you, this is a term of the utmost respect among the Reachfolk."
How did you wind up at Ard Caddach's side?
"A genuine desire for peace brought me here.
The Reach finds itself beset from all sides. Orcs, Nords, Bretons, Imperials … they all seek the destruction of the Reachfolk. I try to serve as a bridge of sorts."
A bridge?
"Yes. A bridge between the Reach and the civilized world.
There's simply no reason that the people of Tamriel should go on killing each other. We have an opportunity to build a kinder, better Tamriel. I'm here to help make that future come to pass."

Tell me more about Ard Caddach.

"A history lesson? Very well.
Caddach is the cousin of the late Emperor Leovic. He was appointed ruler of Markarth and has governed this region ever since."
I've heard him called both ard and the Despot of Markarth.
"Ard is an ancient title that translates to king of the fort. The fort being Markarth and Understone Keep.
As for that other epithet, it's a name given to him by enemies and outsiders. He may be cruel at times, but he's no tyrant."
Why isn't he just called king of the Reach?
"Reachfolk have a saying. Anyone can be a king in the Reach. No one can be a king of the Reach.
Few Reachfolk will accept a true sovereign. It isn't in their nature. Of course, that makes Caddach's attempts to safeguard this region … complicated."

What's the rebellion all about?

"What is any rebellion all about? Malcontents chafing against the established order, stirring up trouble.
They're a nuisance, nothing more."
If they're just a nuisance, why do you want me to find Arana?
"It's a matter of timing. Since the arrival of the Gray Host, the land beyond the city walls has become perilous. The ard urges everyone to take shelter here in Markarth, while Arana calls them away.
Her reckless endeavor will get everyone killed."
I thought Ard Caddach said he made peace with the Gray Host?
"Peace, yes. Of a sort. As long as we stay out of their way, the Gray Host has no quarrel with us. Besides, the walls of Markarth are impregnable. The Reachfolk are perfectly safe in here.
Now go. Find Arana. A favor performed is a favor returned."

Lady Belain: "Do not be concerned, Rada al-Saran. Your plan proceeds. Caddach hangs on my every word and soon Reachfolk will fill Markarth like a larder."
Rada al-Saran: "Excellent. With Markarth prepared, we need only claim the Arkthzand Keystone."
Lady Belain: "I'll make inquiries. Just remember our arrangement. Like you, I hate to be disappointed."
<Lady Belain disappears in a swarm of bats.>

When you reach the balcony overlooking the keystone room inside Bthar-Zel, you'll see Count Verandis Ravenwatch and Gwendis enter the chamber.

Count Verandis Ravenwatch: "There! That must be the Arkthzand Keystone!" Before they can reach the keystone Rada al-Saran appears and freezes them in place:
Rada al-Saran: "Verandis? So it's true, you are alive. Nevertheless, the keystone is mine."
Lady Belain: "I told you I saw him, skulking around Markarth. He's not as impressive as you led me to believe."
Rada al-Saran: "Enough, Belain. Take the keystone. My Verandis would give chase. This pathetic creature? I don't know what it will decide to do."

Verandis and Gwendis become free of the spell and give chase:

Entering the observatory with Verandis, you'll spy Belain and Rada below:

Lady Belain: "The Orrery of Arkthzand. The key to our salvation. It has stood here, unmoving, for nearly three thousand years."
Rada al-Saran: "You're sure the keystone will power it, Belain? It must be ready when the time comes."
Lady Belain: "The keystone is only part of the puzzle. As you agreed, we must also awaken the Dark Heart."
Rada al-Saran: "I gave you my word, Belain. The Gray Host will make your prophecy come true."
Lady Belain: "Reach witch signs and portents can be tiresome, but they are necessary for this. The Dark Heart must beat again!"
Rada al-Saran: "And it will, Belain. Soon. With the keystone, we can come and go as we please. Now, let us leave this place. We still have much to do before we restart the orrery."
<The two vanish>
Count Verandis Ravenwatch: "Reach witch prophecies? What fates are you tempting now, Rada?" 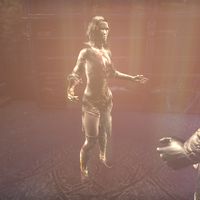 As you delve deeper inside the Nighthollow Keep with Count Verandis Ravenwatch you can observe visions from the past. During the first vision Lord Idrisin can be observed talking with Lady Belain:

Lord Idrisin: "We broke through. The way to the Dark Heart is open. "
Lady Belain: "But the Heart falters. Something is wrong."
Lord Idrisin: "I have longed for this moment, my lady."
Lady Rhainne: "The damn Dwarves! If they depleted its energy … ."
Lady Belain: "Seal the Dark Halls. Until the Heart recovers, only those who bear the sign of the inner circle may partake of its gifts."

Rada al-Saran: "A dormant Dark Heart is of little use to us, Belain."
Lady Belain: "It can be awakened, but I need to get the help of the Reach witches."
Rada al-Saran: "Patience, Belain. Not until I restore the Gray Host. Not until we unlock the orrery."
Lady Belain: "More delays! Very well. But the Dark Heart must beat again, Rada al-Saran. Nothing else matters."
Count Verandis Ravenwatch: "It seems Rada came here a long time ago. This is the most recent memory, but it's still centuries old."

Lord Idrisin: "Belain, we're dying. There's nothing you can do. "
Lady Belain: "I refuse to accept that, Idrisin. But one of us must remain strong to save the others."
Lady Belain: "I will take the remaining energy from the Dark Heart. It will sustain me until I determine how to make it beat again."
Lord Idrisin: "No, Belain. You know blood no longer sustains us. If you take the last of the Heart's energy, the rest of us will starve … ."

Inside the Dark Heart Chamber, make your way through the tunnel and you'll see a dark orb rising from the ground, the Dark Heart.

Count Verandis Ravenwatch: "Can you feel the void energy? That's the Dark Heart!" 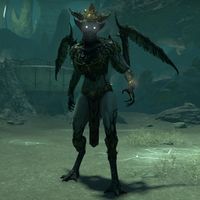 Inside Orrery, you'll see Rada already at the apparatus:

Rada grips Verandis in a spell, lifting him helplessly off the ground:

Rada al-Saran: "Oh, but you're wrong. About so many things. Can't you feel it, Verandis? The tug of the Dark Heart on your cursed soul."
Gwendis: "Leave him alone!"
Count Verandis Ravenwatch: "The Dark Heart …. You're going to sever our souls from Bal?"
Rada al-Saran: "You see? Once I gather the exarchs to my side, my ancient promise will be fulfilled."

Rada releases Verandis who falls to the ground. Meanwhile, Lady Belain appears before you:

Rada al-Saran: "Belain, spare Verandis and his cherished daughter. Dispose of the rest."
Lady Belain: "Come and gaze upon the Heart. Come and witness my true power!"

Lady Belain turns into a Vampire Lord while your world goes black.

Lady Belain: "You fools. The Dark Heart is mine to command. This is the place where your little rebellion ends."

Each time you defeat the three Voidmothers, you'll teleport down to the main arena where Belain will say:

While you're battling her, she'll say:

Lady Belain: "The darkness, it flows through me!"

Lady Belain: "The power of the Void is mine!"

When the fight starts, you need to use Arana's Void portals reach the three Voidmothers Belain is using to feed on the Heart. Arana first opens a portal to the northeast platform, which has no Voidmother, then throws one to the southeast platform. The first Voidmother relies on summoned Shades to attack. When the first Voidmother dies, Arana summons a portal to the northwestern platform, and one to the southwestern platform after the second Voidmother goes down. The second Voidmother summons a large Void Rot and uses an attack where she falls to the ground and contorts her body. The third Voidmother summons Shades and relies on picking you up and dropping you from great heights to deal damage.

If you die, the fight resets, Lady Belain says her schtick about your rebellion ending again, and the Voidmothers respawn.

She summons the Voidmothers again at 61% health, and again at 21%.

Ground Smash
Lady Belain smashes her fists on the ground, sending a shockwave of green Void energy blasting outward and dealing moderate damage. Roll dodge or get out of range to avoid.
Vampiric Wail
Lady Belain screams, sending a shockwave of green Void energy rippling in a cone-shaped area in front of her. Move out from in front of her to avoid.
Talons
Vampiric Grip

Void Wave
Lady Belain sets down five circles of Void energy in a straight line across the arena, which begin to move. Arana sets up a Void Portal behind Belain for you to use to avoid taking damage as the damage circles start crawling towards you. If you get hit, you'll be knocked down and take major damage.
Blood Spear

Feeding on the Dark Heart:

Standing on the cracked, blue-green glowing ground beneath her while Lady Belain is feeding on the Dark Heart deals low damage over time.