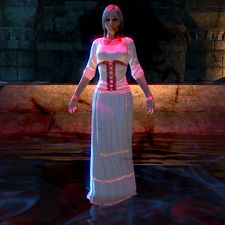 Lamae Bal, the first ever vampire

This article is about NPCs who are vampires. For the disease's effects on the player, see Vampire.

Vampires are NPCs afflicted with Vampirism. The disease causes them to physically change, giving them pale pigmentation and glowing eyes. Vampires are blessed with supernatural powers but their condition makes them vulnerable to fire damage abilities such as Vampire's Bane. Their powers include mist form and the ability to summon bat swarms.

Vampires can be found across several zones, but they're most populous in Rivenspire, Western Skyrim, Blackreach and The Reach.

There are some vampire groups with known names, as well as unnamed covens based in particular areas. This is a list of named factions; for more groups, see the tables further down the page.