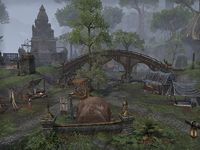 Redfur Trading Post is a town in northwestern Grahtwood. It is a trading coster with a reputation for allowing thieves to run free so long as they take from the greedy, give to the needy, and are good enough to not get caught. An organization known as the Hollow Moon exists for that exact reason. They steal from wealthy merchants and give what they steal to those in need. Be it gold to buy food, silks to trade for other goods or gold to buy food, medicine for the sickly, etc. The Hollow Moon often clashes with the town's law enforcement group, known as Jode's Chariot. The settlement is led by Shan-ra, the man who employs Jode's Chariot. 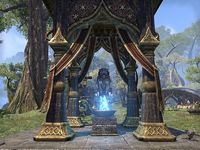 This Elder Scrolls Online-related article is a stub. You can help by expanding it.
Retrieved from "https://en.uesp.net/w/index.php?title=Online:Redfur_Trading_Post&oldid=2388795"
Categories:
Hidden categories: