The Eyes of the Queen is the Aldmeri Dominion's secret intelligence service. It's said that Ayrenn began assembling a network of informers on the continent of Tamriel long before she returned to Summerset to assume the throne. 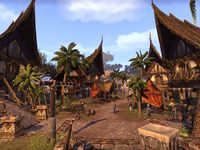 Pa'alat is a small town in northern Reaper's March, northwest of Dune. Due to its beautiful location and privileged climate, the town used to be a vacation spot for the nobles and the elite of Elsweyr before the Three Banners War. Now, it is considered a ghost town by its own inhabitants, instead, it is crowded with soldiers and spies from the Daggerfall Covenant and the Ebonheart Pact, even occupying the empty houses of the settlement. The towns lacks a formal government and even its streets are not guarded. However, in practice, Krin Ren-dro rules the settlement from his mansion and uses it for its own purposes. Madame Bellyscratch is the only other that actually has something to say in the town as she owns the brothel which services all those spies and soldiers attracted by this espionage hub. Due to all these conditions, Pa'alat's economy is reduced to prostitution and information trade.

This Online-related article is a stub. You can help by expanding it.
Retrieved from "https://en.uesp.net/w/index.php?title=Online:Pa%27alat&oldid=2086812"
Categories:
Hidden categories: