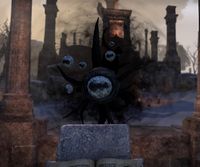 Hermaeus Mora is the Daedric Prince of Fate and Forbidden Knowledge. For more information see the lore page.

Throughout Rootwater Grove, Mora's disembodied voice will address you:

Within Ilymris, Mora manifests and speaks to you:

"I am Hermaeus-Mora. The riddle unsolvable. The door unopenable. The book unreadable. The question unanswerable.
I wonder if you understand why you're here."
I am here to bind the Daedra.
"You will bind the Daedra, but you do not yet know what tendril of fate and fortune brought you into my grove, into this ruined reflection of my library."
What do you mean?
"In due time.
But as to the Daedra, their magicka powers the wards that protect my library, but binding them here is no small task. It requires a foundation of souls, each of different blood, from my servants in Tamriel."
What happened to them?
"The intruders who broke the wards above unwittingly loosed the bindings here below. Four of the souls broke free. In their confusion, they wander these halls seeking escape. Subdue them to restore the seal. I will reward your faithful service."

What happened to Saromir?
"Ayleid crystals impart memories directly to the reader. Overuse leads to a problem of capacity for most mortals."
I may help you, but I am not your servant.
"Willing or unwilling, all who strive to grow in skill and scope are my servants."

If you speak to him again before completing the task, he'll say:

Once you've captured three of the souls:

"Three servants reunited to their master. Only one remains."
Where is the fourth soul?
"A conundrum. The Bosmer soul escaped Ilmyris. We require a replacement. Saromir, my caretaker, satisfies all requirements.
Kill him, and bring his soul to me."
And if I refuse to kill him?
"One will die whether you refuse or not.
Put the mad priest out of his misery, or I will choose another. Be assured, you will find that choice … less than optimal."

Fine. I will kill Saromir.

"Your rebellion is noted, and the consequences take shape. Orthenir is drawn to his death in Saromir's place.
Bind his spirit, unless you are willing to let the Daedra overrun Greenshade."

If you chose to sacrifice Saromir, who has gone insane and gladly willing to die, Mora will say the following:

"The ritual is complete, and the Daedra of Ilmyris guard their very prison. Orthenir is caretaker now, until another comes to take his place."
You promised to reward my service.
"My memory is unerring as my word. In the crystal behind you, you will find knowledge you didn't know you sought, but others have killed for."

If you refused to sacrifice Saromir, instead forcing Orthenir to die, Mora will say the following:

"Orthenir's soul seals the binding, but without a caretaker the Daedra flee. It is temporary. The mountain is worn away and the tides rise and fall with the same inevitability."

Once you have activated the Ayleid crystal and witnessed the conversation between Vicereeve Pelidil and Laryaril, you can speak to Mora:

"One by one, Naemon and Pelidil exposed my servants to the crystals, until their mortal minds cracked and groaned under the strain."
Why? What were they looking for?
"What else? Power. They called it the Heart of Valenwood, but no matter what it's called, it means the same thing."
What is the Heart of Valenwood?
"You have not yet earned that knowledge, which Naemon and Pelidil took by force.
They went to Hectahame. Where you go is your choice, but I will be watching."

You can then complete the quest, and Mora will disappear from the ruins.

After defeating Lorelia in Bisnensel, Hermaeus Mora will appear hovering over the shrine. He will be pleased that you stopped the nereid's transgression against nature.

"So you are the one the tides of fate carried here to stop this trangression.
I had watched this pathetic spirit's attempt to avoid her fate with some amusment … but I knew it would eventually have to come to an end."
Why didn't you just stop her yourself?
"Where would be the fun in that?
The individual yarns of fate do not concern me. It is the tapestry they weave that I watch and record. All threads, even yours, only make up a small part of the whole."

So you know my fate?
"I do. I can see your future … and your past. The yarn of your life is interesting, perhaps even amusing, one might say.
It's spun from a strong thread, to be sure, but all threads will eventually run out."

Can you tell me anything about my future?
"No."

Why did you summon your followers here?
"I did no such thing. Like moths to flame, my followers are simply drawn to dark mysteries, and this one was simply irresistible for them.
It's a wonder more of them didn't die."

You don't care whether your followers live or die?
"No. Why would I?"

If there's nothing more, then I will go.
"Yes. That is what you will do.
First though, I have something for you. A gift, you might say."

Is this gift something I actually want?
"Whether you want it or not is irrelevant. I like to reward those who amuse me, and this is your reward.
You will take it."

After accepting Mora's gift, you can speak with the Daedric Prince once more though he will be annoyed.

"Do you dare to ask more of me?"
I wish to leave this shrine. (You will be teleported outside to the ruin's entrance.)

Upon activating the Mysterious Tome, Hermaeus Mora will appear and address you:

"So another of you comes seeking Hermaeus Mora, and that is me. Perhaps you will prove greater than Graccus. He holds the Oghma Infinium, where lies the beginning of knowledge. Yours if you slay him. Find the descent to the caves below. He is there."

When you reach the large hole in the cellars and drop down into the flooded caverns, Mora will again appear:

"Down the tunnels, in the ruins of the swallowed city: that is where you will find Graccus, and the Oghma Infinium. Prove yourself his better, and take it. He was once a promising subject, but he will never be an Ageless One. Perhaps you will."

During your battle with Graccus, the prince will torment the both of you:

After defeating Graccus, you must then reclaim the Oghma Infinium. When it is activated, the book will disappear and Hermaeus Mora will appear in its place, and you must then speak to him to complete the quest:

"And so the Infinium becomes mine again. As it always does.
You performed well against Graccus."
Where is the Oghma Infinium?
"Safely returned to its home in Apocrypha. I would not risk you against its secrets.
But I will not leave you empty-handed."

He rewards you with leveled gold and the Discourse Amaranthine memento, a book that when used, will temporarily summon a vision of Hermaeus Mora. You have the option of asking hinm some questions.

"You have proven most useful, unlike many before you."

What are these ruins?

"These ruins under the manse vile are the remains of a city of Mer twice forgotten. Here, the children of Auri-El trifled with knowledge that was beyond them. The dirt swallowed them.
Their descendants tried to rebuild, but then came Graccus."

You said the Oghma Infinium would be mine.

"You were told what you needed to hear to become effective.
You should cherish the gift you've been given. It is a leaf from Apocrypha. Only delectable knowledge will you find within its pages."

What did Graccus want from you?

"He sought the power to end some petty conflict of Men and Mer above, but his want is irrelevant.
Graccus showed promise when he glimpsed the Infinium and survived its cosmic ululation. But he ultimately proved mundane."

Ibrula: "Prince of Fate, Lord of Secrets. Your Seeker, Ibrula, has returned to you.
Hermaeus Mora: "Approach me, Seeker."
Ibrula: "Your offering, my lord. A relic from the Dragontail mountains, covered in runes of an unknown language.
Hermaeus Mora: "Your gift is accepted. Tell your companions to approach me."
Ibrula: "Hermaeus Mora wants to speak with you. Approach his statue.

You can then speak to Hermaeus Mora's Statue:

"I am the answer to all questions and the question behind every answer.
No need to introduce yourself. Your name is already recorded in my realm of Apocrypha."
You know who I am?
"I know everything. You have come to my shrine because the stars have fallen to Tamriel. You want to know how to defeat them."
Yes. Can you tell me how to defeat the Celestials?
"I can. But knowledge must never be given freely. A price must be paid.
Part of the cost was bringing my servant Ibrula back to me. But you will pay much more if you want to learn all that I know about the Celestials."
I'll pay your price, whatever it is.
"Then listen closely, as I will not repeat myself. The Celestial Warrior's army of Anka-Ra was created centuries ago by the Yokudan general, Tarish-Zi.
He came to me to learn how to bind his army to him—even in death. I granted his wish."
Why did you do that?
"His offering pleased me. He built the temple above this shrine and promised that his army would defend it.
The Anka-Ra have risen, which means Tarish-Zi has risen as well. They are bound to him. To defeat them, you must defeat him."
How do I do that?
"All I have told you is all you have earned.
If you wish to know more, you must become my eyes and ears in Craglorn. You must bring me fresh knowledge to feast upon."
What do you mean?
"I hunger for lost bits of lore. I thirst for new knowledge to add to my coffers. Bring your offerings to me. If I find them acceptable, I will return their worth in the knowledge you seek."

If you talk to the statue again:

"We have nothing else to discuss at this time, Seeker. Go about your business."

Return to the entrance of Seeker's Archive where you can talk to Hermaeus Mora through a pedestal which stands above the entrance.

"If you would receive knowledge, you must give knowledge in return.
What have you brought me, Seeker?"
I found this blackened gem inside a Dwemer orrery, but I can't read the writing.
"I find this offering to be acceptable. Inside the gem, you can see the celestial bodies in their courses.
The text says the constellations are gods. They can be brought to earth using stones carved from Aetherium. Make of that what you will."

Bring the tablet to the small pedestal above the entrance of the Seeker's Archive. Speak to Hermaeus Mora to complete the quest.

"You enter my temple once more, Seeker. What knowledge have you brought me?"
I found these letters carved into a stone in Zalgaz's Den. What do they mean?
"A death, and an unrequited love. Sentimental, and unimportant.
But you have fulfilled your part of the bargain, so here is mine: there is a man who can help you defeat the Anka-Ra. His name is Titus Valerius, but he is not of this time."

Take the lexicon to Hermaeus Mora at the entrance of the Seeker's Archive to hear if he accepts this offering.

"Knowledge for knowledge. That is my price.
What have you brought me, Seeker?"
I found this Dwemer lexicon in Rkhardahrk.
"The Dwemer knew things you cannot even dream.
Here is your reward: the Celestials are bound to this realm by their Apex stones. These stones were constructed using knowledge stolen from the Dwemer. To defeat the Celestials, you must find the stones."

This Online-related article is a stub. You can help by expanding it.
Retrieved from "https://en.uesp.net/w/index.php?title=Online:Hermaeus_Mora&oldid=2199814"
Categories:
Hidden categories: