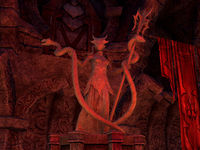 Vaermina is a Daedric Prince whose sphere is the realm of dreams and nightmares, and is the deity worshiped by the Supernal Dreamers, a cult terrorizing Stormhaven. She will speak to you during certain quests as the Statue of Vaermina within her realm, the Quagmire. Unique teleportation devices called "Vaermina's Mirrors" are also associated with her. For more information see the lore page.

Vaermina: "You're a fool to cross me, mortal. I wish your presence in Quagmire. Come to me."

When you speak to her statue, the following conversation will ensue:

"You mortals. Always such high aspirations. You dream of interfering with my plans, but it is a fantasy."
I freed General Godrun, didn't I?

"Do you really think my manipulations would be so vulnerable? You are not even a hindrance."
I don't believe you.
"The success of the Omens was never critical. This was a daydream. The nightmare begins now. You fool. You protected your general … but you sacrificed your king!"
What have you done to the king?

"Of course you don't.
You actually believed my manipulations would be so vulnerable? You are not even a hindrance."
Then I guess I can be on my way?
"You can. There's nothing you can do now. The Omens were a distraction, a daydream. Now, the real nightmare begins!
You see … you protected your general … but you sacrificed your king!"
What have you done to the king?

After the final dialogue option is chosen, Vaermina will leave and open a mirror back to the entrance of the dream, east of Aphren's Hold.

In Emeric's Dream, after slaying the Omen of Betrayal, Vaermina will say:

Vaermina: "I would speak to you again, mortal. Come to the mirror, to Quagmire."

When you speak to her statue, the following conversation will ensue:

"I'm impressed, mortal. You navigated my nightmares without losing your nerve, and yes, you have saved your little king … for now."
I'll save him again if I have to.
"Of course you will. You have slain my consort as well. I'll get over my loss, but I think I'll keep you here for a while in his stead. Perhaps a century or two will teach you humility …."
We'll see about that.
"Perhaps we will. You have proven resourceful in the past. Even if you escape Quagmire, mortal, you will not escape my vengeance. I can be patient, very patient. Goodbye … for now."

Attempt to get Maraamur to sing the "Song of Sinmur" and she'll gloat:

Vaermina : "Wriggle all you want, little worm. These fish will not escape my hook."

Vaermina : "Enjoy the taste of success. These morsels have to sleep again. Sometime."

This Elder Scrolls Online-related article is a stub. You can help by expanding it.
Retrieved from "https://en.uesp.net/w/index.php?title=Online:Vaermina&oldid=2342954"
Categories:
Hidden categories: