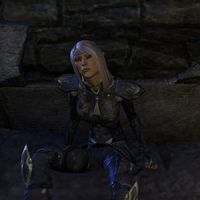 Laryaril is a wounded Altmer member of the Thalmor found inside the Imperial Underground located beneath the city of Woodhearth.

"Oh, perfect. My favorite people. The very faces of my failure … and now you've tracked me down just to watch me die?
You're just like my sister and the rest of the Thalmor. No sympathy whatsoever."
Where is Pelidil?
"Heh. Funny you should ask. I was wondering the same thing. Then I realized he lured me here so his assassins could kill me.
This is my reward for my loyal service. A blade in my gut and a nice, cold tomb."
Do you know what he's planning?
"Planning? Oh, he's well past that point. As we speak, his armies are storming the shore up at Seaside Sanctuary. Once they've got a foothold there, they'll conquer all of Valenwood.
And there's not a damn thing you can do about it."
The Veiled Heritance has armies?
"Of course not. They're just one prong of the mighty trident with which Pelidil will smite the Dominion!
He's signed a treaty with the Maormer. And with the Staff of Magnus he's going to raise an army of undead. Yes. Your days are numbered all right."
How did he make a deal with the Maormer?

"It's simple enough. The Sea Elves have always coveted these shores. If they help Pelidil dismantle the Dominion, he's agreed to give them Valenwood.
It's not like these damn Bosmer have done anything other than cause us trouble."
What about the rest of the Dominion?
"You mean Elsweyr? Far as I know Pelidil doesn't even care.
He just wants the Summerset Isles. I don't even think he wants to rule them himself … as long as they're ruled by someone other than Naemon's sister."

Does he intend to raise Prince Naemon too?

"Of course. Who better to lead an undead army than an undead prince?
And if Pelidil brings him back, Naemon will be bound by the vicereeve's will. No longer will Pelidil need to worry about the prince making bad decisions."
Does Pelidil still think the prince can rule?
"Ha! Pelidil says he's under no illusions about that fact, but he still gets rather glossy-eyed when speaking about Naemon.
I suspect he still harbors some hope that the prince will play a role in the future he has envisioned."

Are you still loyal to Pelidil when he ordered you killed?

"Ayrenn is a false queen and the Aldmeri Dominion is a pathetic joke. Nothing can change that fact, even Pelidil turning on me.
I'll gladly sacrifice my life to bring about the Dominion's downfall. It means my life was worth something."
Was it worth murdering your own sister?
"Having her as a twin was torture. While she climbed the ranks of the Thalmor, I was perceived as a failure. When Pelidil recruited me, it was my turn to shine.
I have no regrets. Heh. In the end, Asteril and I both lost our lives for the cause."

There's nothing more for us to talk about.
"Just leave me to die. I wouldn't accept your help and you'd be better off not offering."

Towards the end of the quest, Hermaeus Mora directs you to activate the crystal to see a vision of Pelidil and Laryaril interrogating Saromir and the crystals for information:

Saromir: "Not another memory! My mind is full!"
Laryaril: "Are you sure we're not wasting our time? How many people has this crystal killed now?"
Vicereeve Pelidil: "Patience. Rest assured, Ilmyris contains the knowledge that Naemon's Shade will need."
Saromir: "No, the roots, they envelop the whole forest … and at the center, such pulsing … augh!"
Vicereeve Pelidil: "Pulsing. The heart. At last. Let me see."
Laryaril: "Wait! What are you doing? The crystal will drive you mad!"
Vicereeve Pelidil: "Magnificent! Such truth, such clarity of sight. Everything leads to Hectahame…."

This Online-related article is a stub. You can help by expanding it.
Retrieved from "https://en.uesp.net/w/index.php?title=Online:Laryaril&oldid=2081431"
Categories:
Hidden categories: