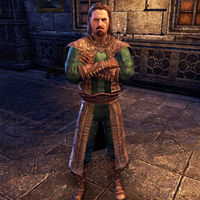 House Dorell is a Breton noble family from Northpoint. They rival House Tamrith and House Montclair for prominence in Rivenspire. They were the founders of the city of Northpoint, and changed their name from Flowdys to an approximation of the nearby mountain, Dore Elard. They have a long tradition in the mercantile and maritime pursuits, and are one of the richest Houses in High Rock.

There are multiple achievements associated with the quests and locations for this faction.

This Online-related article is a stub. You can help by expanding it.
Retrieved from "https://en.uesp.net/w/index.php?title=Online:House_Dorell&oldid=1833393"
Category:
Hidden categories: