We put an end to Reezal-Jul and Lleraya. Now we need to deal with Baron Montclair. But to reach Montclair in his citadel atop the Doomcrag, we first need to find a way through the Shrouded Pass. 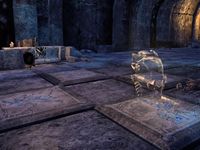 When in an Ayleid ruin, do as the Ayleid spirits

You can either accept this quest from Baron Alard Dorell immediately after you finish the previous quest in Northpoint, or from Count Verandis Ravenwatch, who can be found near the Staging Grounds Wayshrine.

It's tempting to try and reach the Staging Grounds via Crestshade Wayshrine, but the correct approach is to follow the coast from Northpoint Wayshrine. Swimming can be avoided by crossing over sunken paths and Ayleid debris, passing by Veawend Ede (Magnus' Gift set crafting location).

When you talk to Verandis, he will tell you that Baron Montclair is atop the Doomcrag and that he has activated the ruins' ancient Ayleid defenses. He needs you to find a way to the first portal to allow the troops to start their ascend while he finishes his translation of the Ayleid text that you helped him to retrieve from the Lorkrata Ruins. As you move up the hill, you will encounter Baron Dorell and Countess Eselde Tamrith debating which way to ascend. Baron Dorell recommends ascending the path, while Countess Tamrith recommends going through the Ayleid Ruins.

If you enter the Ayleid Ruin, you will encounter Skordo, who will help you defeat the Guardian Construct in the next room. Proceed up the stairs to the first puzzle room, where Countess Tamrith will catch up with you. Activate the switch, which causes Ayleid spirits to appear and kneel on certain Star Panels. Since it is possible to interact with the panels at the same moment as the spirits do, the easiest way to "solve" the puzzle is by following each spirit that appears and interact with the panel that they walk to. For completeness's sake, the correct order to trigger the Star Panels is as follows: The Ritual, The Warrior, The Mage, The Tower and lastly The Shadow. This will release the barrier to the next room. Go up the stairs to the west and back outside to the Shrouded Pass.

Climb the pass to the first portal chamber's entrance. Enter the chamber and activate the portal. Verandis will be the first person to emerge from the portal and you should speak with him to learn about your next step:

As per Verandis's suggestion, you should head back outside and make your way to the second portal chamber. There is a lore book near a skeleton at the base of some nearby stairs, which you may want to collect if you have not added this book to your collection yet. Cross one of the bridges to the west (Darien Gautier is standing on the southern bridge) and go past the Guardian Gargoyle outside the Chamber of the Stone Guardian. 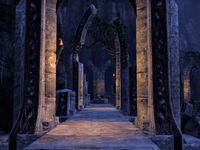 Verandis will join you inside and will tell you to find a way to lower the barrier. Examine the four (non-reanimated) statues around the room. Verandis will translate each plaque to determine which season it represents. Talk to the Stone Guardian, who will pose you a few riddles to test whether you are worthy of moving deeper into the Doomcrag. The riddles and their answers are as follows:

After you have correctly answered all four riddles, the barrier will fall and you will be able to enter Ceynaril. Proceed into the chamber and activate the second portal, from which Baron Dorell and several soldiers will promptly emerge. Talk to the Baron and he will tell you to speak with Verandis to see if everything is ready. Talk to Verandis to complete the quest and to receive your reward, which consists of an Ayleid Greatsword and some leveled gold:

"Once again, you succeeded at the task set before you. Well done, my friend."
I think everyone is here. The pass is ours.
"A battle won, but the war rages on. We must reach the Lightless Remnant and destroy it. But Montclair will grow more desperate the closer we get to that cursed relic. Are you ready, my friend? Once more into the breach?"

Notes
* Any text displayed in angle brackets (e.g., <Alias=LocationHold>) is dynamically set by the game and will be filled in with the appropriate word(s) when seen in game.