We've taken control of the Shrouded Pass and the way to the Doomcrag is open. The time has come to make our final assault and reach Montclair and the cursed relic known as the Lightless Remnant. 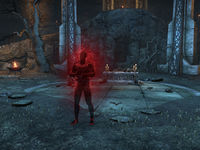 Baron Montclair welcomes you to the Doomcrag

The Final Moments before the Assault[edit]

Talk to Count Verandis Ravenwatch to begin this quest. He will tell you he is worried about what Baron Montclair has planned and wants Baron Dorell and Countess Tamrith to keep their soldiers away in order to prevent Baron Montclair's troops from attacking from behind. Both, however, say they are coming along, as they are far too eager to play an active part in Montclair's defeat to sit the decisive battle out.

As you climb the steps, the spirit of an Ayleid named Wynaldia calls out to you. She warns you that mortals cannot withstand the power of the cursed relic. She will tell you the history of the Lightless Remnant and warn that destroying it will cause the blood curse to spread throughout the land. Verandis and Gwendis have already moved past this section of the ruins, and you will have to pursue them in order to inform them of their allies' decision and the spirit's warning.

Cross the bridge outside of the ruins and listen to the conversation between Verandis and Gwendis. You wil overhear Verandis reminding Gwendis of her training and expressing his concern for her safety, whereas Gwendis insists that she is ready for what lies ahead and that she will not fail him now. Talk to Verandis when his conversation with Gwendis is over, and tell him what Baron Dorell and Countess Tamrith said. Verandis fears that the soldiers could be turned into bloodfiends but realises that it is too late to turn back now and thus decides to move on ahead regardless. Follow him and Gwendis into the Doomcrag Tower Lower Tier. 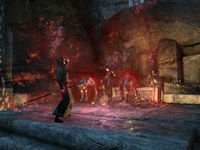 As soon as you head through the door, Baron Dorell and Countess Tamrith will enter as well, with three guards each in tow. Verandis, who is by no means happy about their having followed him this far into the Doomcrag, exchanges some words with them. Then, just as they finish talking, Baron Montclair appears and turns the six soldiers into bloodfiends, who attack. After you defeat them, Montclair summons two bone golems and a couple more bloodfiends. As soon as you defeat this second wave of enemies, Montclair will begin to channel a spell with the intention of teleporting Dorell, Tamrish, and Gwendis to his side of the Doomcrag. Unable to stop Montclair and clearly distressed about what he is planning to do to Gwendis, Verandis tries to reason with him, but his pleas fall on deaf ears. Talk to Verandis after the others have vanished and then follow him up to the next level in an effort to rescue them, where you will find Gwendis, Dorell, and Tamrith trapped in a blood ward.

Verandis will try to dispel the ward, but you will need to defend him and destroy the statues powering the ward in order for him to succeed in hir efforts. Several bloodfiends will attack, followed by a gargoyle. Lead the gargoyle around the room in order to trick it into smashing the statues (which are too robus to be destroyed by your own attacks). When the last statue is destroyed, the gargoyle will die and the ward will be broken. Darien Gautier and Skordo the Knife will arrive, and Verandis directs them to take the weakened Gwendis and unconscious Tamrith and Dorell out of the Doomcrag.

Verandis will tell you to head to the final level and keep Montclair busy while he figures out how to disconnect Montclair from the remnant without actually destroying it and unleashing the blood curse on all of Rivenspire.

Climb to the last level. Baron Montclair will begin attacking you as soon as he appears. Defeat him and Verandis should appear momentarily. The remnant will begin to crack, and Verandis, who can sense its power, is briefly tempted to try to take control of it, but resists. Talk to Verandis and he will reveal he has made a deal with Molag Bal to take him and the remnant to Coldharbour. He tells you that this is the only way to truly save Rivenspire from the remnant's dark powers and moreover asks you to tell Gwendis, whom he believes his self-sacrifice will prevent him from ever seeing again, that he will miss her and that he is proud of her. Verandis then leaves with the remnant and you are returned to the base of the Doomcrag where Dorell, Tamrith, Skordo, Darien, and Gwendis await.

Talk to Darien, who will inform you of the fact that Gwendis has not taken the fact that Verandis has not returned well at all and asks you to speak with her. Baron Dorell will have a mage open a portal to Shornhelm and everyone except Gwendis will leave. Although Gwendis is distraught to hear that Verandis is stranded in Coldharbour, she expresses her hope that he will at least be able to find some peace with the fact that he managed to put an end to Montclair's menace, and adds that she and her peers will certainly continue Verandis's work and keep his legacy alive.