The UESPWiki – Your source for The Elder Scrolls since 1995
< Elder Scrolls Online: Quests: Ebonheart Pact / Eastmarch
Jump to: navigation, search

Valeric believes vampires don't have to be monsters. He wants my help to stop his father, Majorn, who plans to create an army of bloodfiends.

After helping Valeric with the previous quest, he will explain that his father is responsible for the bloodfiends prowling around Wittestadr. He asks that you help put an end to his father's plans to raise an undead army. You will need to talk to Jaruk, who has a plan to save some hunters who will otherwise become unwilling thralls of Valeric's father. After exiting the manor, you will be confronted by Tunus with a summons from Majorn the Ancient. If you decide to ignore the summons, proceed straight to the camp.

Enter Majorn's manor and speak with the elder vampire. He will attempt to convince you that his bloodfiends are the lesser of two evils, and claims that Valeric's coven is a danger to all of Eastmarch due to their refusal to feed on anything but animal blood. You must make you decision to side with Majorn or stay true to Valeric. 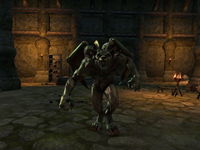 If you side with Valeric, Majorn will angrily dismiss you, and you need to head to the hunter's camp to continue with Jaruk's original plan. Defeat five of the hunters and splash them with the putrid liquid. Return to the other manor and speak with Valeric, who will announce that the time has come to deal with his father permanently. Head back to Majorn's manor and speak with Rala once inside. Majorn's warning rings true when she struggles to contain her thirst for blood at the sight of Tunus' dead body, although if you have the Persuasive Will ability you will be able to snap her out of it. Enter the crypts below the manor and fight your way through the vampires until you reach Majorn himself. Midway through the fight, he will transform into a gargoyle. After you've defeated him, return to the surface and speak with Valeric for your reward.

If you side with Majorn, he gives you a rune to make a bloodfiend your minion. He tasks you and the bloodfiend with killing six hunters in a camp south of Wittestadr, as they would otherwise be helping Valeric. After killing the hunters you are to return to Majorn, who then wants you to head underground into the crypts and kill Valeric. The entrance to the crypt can be found in a room off to the left of the main room. Majorn also gives the Life Stealer ability, which has a 10% chance to heal you for 20% max health on hit in Wittestadr. Enter the crypts below the manor and fight your way through the vampires until you reach Valeric himself. After you've defeated him, return to the surface and speak with Majorn for your reward.

This Elder Scrolls Online-related article is a stub. You can help by expanding it.
Retrieved from "https://en.uesp.net/w/index.php?title=Online:The_Better_of_Two_Evils&oldid=2155178"
Categories:
Hidden categories: