The UESPWiki – Your source for The Elder Scrolls since 1995
< Elder Scrolls Online: Places: Unzoned / Dwemer Ruins
Jump to: navigation, search

The Dwarves tapped the heat at the heart of Nirn for many purposes. They used steam to warm their subterranean cities and to motivate their devices. To forge their superb metals, they needed such intense heat that it could only come from molten lava. 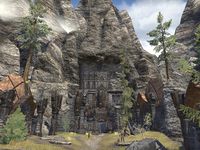 The Earth Forge is a secret Dwemer ruin in the mountains which is maintained by the Fighters Guild.

The forge serves as part of the Fighters Guild quest line and becomes fully accessible after completing it. The Earth Forge can only be accessed via the portals in the Evermore, Rawl'kha and Riften Fighters Guildhalls.

It is home to two special crafting sites. A small, exit-only wayshrine can be found in the exterior area. The ruin consists of two zones, the Earth Forge and Pressure Room III. 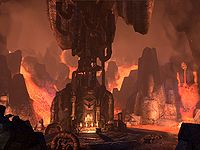 The heart of the Earth Forge

The crafting site for making Kagrenac's Hope set pieces can be found in the heart of the Forge, where the Prismatic Core was forged. 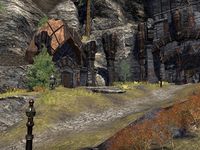 The entrance to Pressure Room III 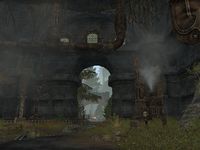 The Orgnum's Scales set can be crafted in Pressure Room III - a small building located just outside the entrance of the ruin. A note From Jofnir to Merric lies on the ground near the crafting site. A "Curious Dwemer Rubble" pile can be found in Pressure Room III, behind the clothing station. It can be looted once per account (not once per character) to receive the Antiquity lead for a Dwarven Breastguard, which is part of the Ebon Dwarven Wolf mount.

During The Prismatic Core you will enter a solo version of the Earth Forge where you will need to defend the Earth Forge against Molag Bal's undead minions. During Will of the Council, you will return to the forge while preparing to search for Sees-All-Colors and the Mortuum Vivicus, and again afterwards, but no enemies will appear during these visits. Pressure Room III will be blocked off in both of these instances. Additionally, there will be no crafting stations and no wayshrine. You will enter and exit the Earth Forge via temporary portals that appear during the quests. 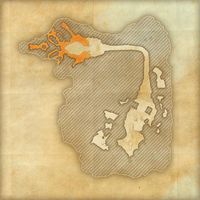 A map of the Earth Forge 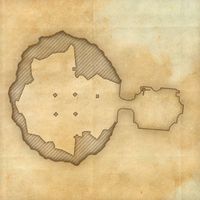 A map of Pressure Room III
Retrieved from "https://en.uesp.net/w/index.php?title=Online:The_Earth_Forge&oldid=2383711"
Categories: