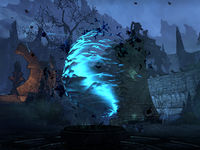 The Mortuum Vivicus was a powerful weapon created by the Daedric Prince Molag Bal. It was a massive spell that was capable of holding and harnessing thousands of souls, and could destroy all of Tamriel if it were released.[1] It had no physical form, instead appearing as a large orb of cold light. It was originally given as a gift to the Ayleid King Anumaril of Abagarlas, a Daedraphile settlement on City Isle that was dedicated to Bal. The Abagarlans planned to use the Vivicus to drain all life from the rival city of Delodiil and reanimate its citizens as undead servants of Molag Bal,[2] as penance for King Cenedelin's mockery of the temple of Abagarlas.[3] The Meridia-worshipping city of Delodiil responded by forging a powerful weapon imbued with the Prismatic Core, a powerful crystal given to them by Meridia.[4] An elite group of warriors were then sent to Abagarlas to preemptively destroy the Vivicus.[5] However, Bal snatched the weapon away right before it could be destroyed, returning it to his realm of Coldharbour for safekeeping.[6]

The Vivicus would lie dormant in the Halls of Submission for several thousand years until 2E 582, when Molag Bal began an all-out attack on Mundus during his attempted Planemeld. Using the power of the unprecedented amount of souls being sacrificed in his name, Bal hoped to return the weapon to Tamriel and "burn" the entire continent.[7] The weapon would strip the souls of countless mortals from their hosts and create a nightmarish storm of undeath.[8]

During that time, the Fighters Guild had come under the sway of Meridia, with its guildmaster murdered and replaced by one of her worshippers. Meridia's faithful provided enough gold to dedicate all of the guild's resources towards destroying Bal's Dark Anchors. Seeking to reveal Guildmaster Sees-All-Colors' treachery and thwart Meridia's plans, Molag Bal had his own servant, Aelif, work alongside the guildmaster and the Vestige. Sees-All-Colors and the guild learned of the Mortuum Vivicus after Molag Bal's servants captured one of their own, a servant of Stendarr. Bal required pure souls to enact his plans for the Vivicus, and the souls of those devoted to the Divines were suitable for this purpose.[9] The guildmaster and the Vestige began looking into the Vivicus,[10] learned of the Prismatic Core and retrieved it.[11] The events that followed led to the guildmaster being hunted for her role in the previous guildmaster's death, culminating in Aelif and the guild's champions tracking Sees-All-Colors to the Halls of Submission, where the Mortuum Vivicus was being held. Aelif betrayed the guild at the last second, and was defeated in combat by the Vestige, whom destroyed the Mortuum Vivicus using the reforged Prismatic Weapon.[12]