The UESPWiki – Your source for The Elder Scrolls since 1995
< Online: Places: Vvardenfell / Daedric Ruins / Delves
Jump to: navigation, search

"Among the ancient ancestral spirits who accompanied Saint Veloth and the Chimer into the promised land of Morrowind, the four Daedra Lords, Malacath, Mehrunes Dagon, Molag Bal, and Sheogorath, are known as the Four Corners of the House of Troubles." 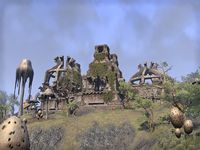 Ashalmawia is a delve found in the West Gash region of Vvardenfell containing Worm cultists.

Galur Rithari, a Dunmer vampire and former Buoyant Armiger, can be found here, seeking vengeance on the Worm Cult.

There are two achievements associated with this location:

This Online-related article is a stub. You can help by expanding it.
Retrieved from "https://en.uesp.net/w/index.php?title=Online:Ashalmawia&oldid=2161401"
Categories:
Hidden categories: