Captain Janeve, the shield of the Shornhelm Guard and Countess Tamrith's younger sister, has established a camp for refugees displaced by the vampiric menace.

The sisters Tamrith and Darien Gautier at the camp

Once you have finished the quest Dream-Walk Into Darkness, you can acccept this quest from two different persons. The first and perhaps most likely candidate is Count Verandis Ravenwatch. He has learned that Reezal-Jul is lurking somehwere in the west and wants you to warn Captain Janeve, who has established a camp in that area, of the imminent danger that he poses. The second candidate is Captain Janeve herself. She is, after all, more than happy to accept your help in dealing with the threat that she turns out to be already aware of even if you were not sent to her by Verandis.

"You look like you can defend yourself. Welcome to Camp Tamrith."
I was sent to warn you. Reezal-Jul is going to attack this camp.
"And by the Light, we'll be ready for the mad lizard. We were tracking him when we ran into these poor, displaced people. We threw together this camp to shelter the refugees from Crestshade and the surrounding countryside."
What can I do to help?
"Since my sister decided to visit, I must secure the camp. To this end, I need someone to find Jonah Marose.
Jonah claimed he could sense Reezal-Jul. Made the other refugees nervous. He and his mother fled the camp and disappeared."
I'll find Jonah and his mother.

Everything is 'fine' at Southgard Tower

Jonah and his mother can be found in Southgard Tower, which is an old guard tower that stands to the west of Camp Tamrith and appears on the map as a striking locale. You arrive not a moment to soon, as Montclair forces attack the tower mere instants after you arrive. Deal with the hostile troops and then head to the top of the tower, where an obviously scared Jonah is hiding out near his (to put it mildly) unwell mother. Even though Jonah himself appears to be either affected in some way by Reezal-Jul's magic or not quite sane, he is lucid enough to tell you that bloodfiends are on their way to Camp Tamrith. He himself refuses to come there, both out of fear of being turned into a bloodfiend and so as not to endanger the others.

Having completed the task that Captain Janeve gave you, it is time for you to return to Camp Tamrith. Unfortunately, the camp has been the site of a vampire attack while you were off to do the Captain's bidding. Many refugees are dead, a number of soldiers have been wounded and Darien and the Captain herself are missing altogether. Captain Janeve's older sister, Countess Eselde Tamrith, is still at the camp, however, tending to the wounded soldiers and refugees. It is her that you should speak to in order to learn what you should do next:

"We didn't even have a moment's warning. By Arkay, the vampires. They struck so fast."
I don't see Captain Janeve or Darien.
"When the vampires attacked, Janeve and Darien charged right into the thick of the battle. I lost sight of them since I stayed to defend the camp, but I could hear Janeve calling out orders.
Perhaps some of the guards saw what happened after that."
I'll talk to the guards.
"Here, take these healing poultices. You might as well help me tend to the soldiers while you're talking to them. I'd appreciate it, and so will they.
After that, find my sister. She has a tendency to get into trouble when I'm not right beside her."

Vampires attacked the camp in your absence

There are three guards that you need to deliver poultices to, namely Abadi, Remic and Lieutenant Sgugh. Helping the guards is optional and you may decide for yourself whether you will cary out this task or would rather go straight after Captain Janeve and Darien. However, it can be useful to have a word with the guards first, as they can at least tell you what direction you should search in, namely to the (south)west. Head in that direction, towards the river, and you will soon find Darien, who is mildly wounded and surrounded by dead Montclair troops. Speak with the knight to learn more about what happened to Captain Janeve:

"This? It's merely a flesh wound! Think nothing of it. I'm worried about Captain Janeve, though."
What happened to the Captain?
"She caught sight of Reezal-Jul and rushed after him. I, of course, followed. His vampires surrounded us, and while I was fighting them off, the good captain was dragged away.
They took Janeve into that cave. Hurry! You need to save her!"
What about you?
"I can barely stand. I'd just slow you down.
I'll send reinforcements your way—if any show up, that is."

If you continue to follow the river, you will eventually come across two familiar faces, namely those of Jonah and his mother, whose situation has deteriorated even further since the last time that you saw her. You can either speak with Jonah and try to get him to reveal a shortcut (which is guaranteed to work if you have the Intimidating Presence passive from the Fighters Guild skill line), that is located just behind him and his mother, or you can continue to search for a way into the cave yourself. 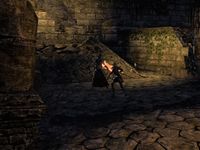 "If you hurt my sister, I'll kill you myself!"

Inisde Shadowfate Cavern, you will need to fight your way through Montclair troops in order to reach the chamber where Reezal-Jul is performing a dark, evidently necromantic ritual. Getting there is rather straightforward, and once you do, you will soon be joined by Countess Tamrith herself, who is determined to save her younger sister from the malign Argonian:

Reezal-Jul: "Feast, my children! Feast on bones and blood!"
Countess Eselde Tamrith: "If you hurt my sister, I'll kill you myself!"

A boss fight ensues, during which Reezal-Jul occasionally summons undead minions to aid him while Countess Tamrith continues to fight at your side. Once the Argonian has been slain, the Countess will charge on ahead, desperate to find her sister. Follow her, and you will soon learn that even though Captain Janeve is not quite dead, the conclusion that these events have led to is not an altogether favorable one either: 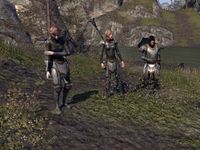 Will Captain Janeve make it out of Shadowfate Cave alive?

As is quite evident from her pale complexion and crimson eyes, Janeve has been turned into a vampire. But even though she is admittedly distraught at the change that was forced on her, she disagrees with her sister on the consequences that this should have:

"I can see it in your eyes. I'm turning. Becoming one of those... things.
No! I refuse to give in to despair! I want to live, gods damn it! I want to live!"
How do we know you won't become a monster?
"I heard what my sister said. She thinks I'm evil. Unholy. But it's still me! I'm still the shield of House Tamrith! I'm still her little sister!
We've seen it before. Not every vampire is a monster. I can control this. I … I want to live!"

At this point, you will need to decide Captain Janeve's fate. You can either agree with Countess Tamrith, who will then kill Janeve with a quick-acting poison, or you can decide to spare Janeve's life, perhaps having been convinced by Verandis and his compatriots that not every vampire is a monster. Even though the Countess will be rather upset with you if you decide that her sister should be spared, she will still recognize your success in dealing with the threat that Reezal-Jul posed to the region, as becomes clear when you speak with her as a final step towards completing the quest.

The Countess will then reward you with Darkstride Reezal-Jul's Dagger and a tidy sum of gold, after which you may want to accept the next quest in Rivenspire's main questline from Gwendis, who has arrived in the meantime and wishes to discuss some important developments with you.