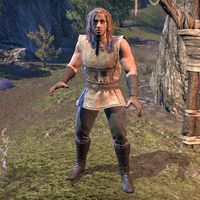 Filand is a Nord found in Bloodroot Forge, fleeing from the Dreadhorn Clan after he was abducted from his home by them.

When you first enter the Jerall Cleft outside the Bloodroot Forge, you will find a ruin cart and Filand will run down the road towards you. He will then stop to catch his breath before noticing you,"I can make it. Just a little farther—Ah! Wait, you're no Reachmen!"

Speak with him to find out what is wrong and to see what he knows about the place.

"Kyne be praised, I wasn't sure I'd see the end of these cursed wilds!
Please, you have to help the others! These beasts torched our homes and dragged us to this place to slave and die."
Who are the beasts who brought you here?
"Reachmen and minotaurs! Like none I've ever seen. They cut out their hearts and put the blood red rock we mine in their place. It turns their skin to stone and their blood to fire.
And that's not even to speak of their infernal Forge."
The Forge?
"The earth's beating heart! It thunders day and night, shaping their twisted Heartstones and wicked blades that thirst for blood. Those of us they take to the Forge never return.
Will you spare the others from that fate?"
I'll put at stop to the forge and save who I can.

At this point the dialogue will differ between doing the quest and subsequent rerun of the dungeon.

"No. All these beasts serve their Patriarch: Gherig Bullblood. Even the Forge seems to obey his command.
It all stinks of Daedric pacts to me."
Do you know anything of his plans? / Do you know what drives them to do this? What are they planning? / It sounds like they are preparing for something, do you know anything of their plans?

"Usually the Reachmen come to pillage what they can before they're chased off, but this clan is leaving nothing behind in their wake. They're here to hunt us. To conquer us. I think they're raising an army."

What is the red stone they were forcing you to mine?

"Nirncrux. More than I've ever seen. New veins seem to seep up from the earth every day through the vines, like the whole place is alive. What they use it for defies belief."
What makes you say that?
"The fruits of the Forge, their Heartstones and weapons, twist them into bloodthirsty monsters whose flesh and blood is stone and fire. They turn out more with each passing day."

Where did this Forge come from? Did the Reachmen create it?

"Reachmen are barbarians. Raiders and scavengers. They don't build. That Forge is something from ancient times, maybe not even built by mortal hands, but they're working it all the same with their foul Reach magic."

Filand will have followed behind you as you fought your way up the path. He will run up to you after you have defeated Mathgamain:

Filand: "Ysgramor's axe! You can beat them! Come! This way—"

His encouraging words are abruptly cut off when he is snatched up by a Dreadhorn Harpy.

After fighting your way through Sanguinary Veins to the Central Forge, Filand will run in once the Earthgore Amalgam is destroyed.

You can then speak with him:

"That … that—that's it then? They're dead and gone? And that bloody forge lies quiet as their graves?"
I believe so.
"Kyne choke this place in weeds for eternity. I'll hear that hammer in my nightmares for the rest of my days ….
We've been left with nothing to offer you other than our thanks, but you're welcome to all of it."

Once you have completed the quest, Rena Hammerhands and a group of freed captives follow him through the door.

Rena Hammerhands <Sniffing the air and panting>: "I can smell Reachman blood! Where are they?"
Rena Hammerhands: "Pah! All carved and bled like fattened calves...! Served up for Sovngarde!"
Filand: "Quick! Cut the others free, before this infernal thing wakes again to drink our blood!"
<The group of captives scatter.>
Rena Hammerhands: "Cut them free! And find them proper blades. There's more Reach-dogs where these came from!"
<Filand shakes his head.>
Filand: "No! Toss those wretched things to the fire! It's over, don't you see?"
Rena Hammerhands: "It'll never be done …! Not until every last Reachman has drawn their final breath."

Filand can then be asked more questions:

"I heard others found sanctuary in Falkreath. I might head there too. Wait for safer times. Anywhere far away from this cursed place … before I wind up like the others.
You've seen what I mean. The look in their eyes? Like hungry wolves."
You shouldn't have followed me. You're lucky to be alive.

"I had to see for myself that you could do it—to believe you could save them. I couldn't live with myself if I'd just saved my own skin and ran ….
Kyne was watching over me today, to be certain."

Falkreath is a refuge?

"Largest city in the hold and seat of the Jarl. If anywhere's safe from these rabid Reachmen, it's there."

I saw. Those Reachmen were like slavering animals. / You think the Forge is driving people mad?

"Not just the Reachmen! Take a look at my kin. Honest, hard working Nords, never held an ax for more than splitting wood, now they're clamoring for blood! Crazed and feral.
Not me! I'm not going to let it happen to me."