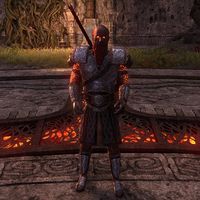 Gherig Bullblood is the Patriarch of the Dreadhorn Clan, and leader of the clan's operations in the Bloodroot Forge. He is tasked with feeding the forge with the blood and bodies of his captives, some of whom can be seen ensnared on the walls in the heart of the forge. In the final chamber of the dungeon, he works with the Attendant of Flame and Attendant of Blood to create the Earthgore Amalgam, summoned upon their collective defeat.

As a boss type enemy, Gherig Bullblood is immune to all forms of crowd control effects.

When you enter the forge, Gherig will be seen sacrificing a Captive in the lava at the center of a forge, chanting a ritual to summon the Earthgore Amalgam:

Entering combat he will say one of the following:

"We will trample all Skyrim to dust!"
"I am the Dreadhorn Clan!"

"The Forge beckons!"
"I can feel its hunger!"
"Vengeance for my children!"
"Feel the teeth of the Forge!"
"The Forge thirsts!"
"My teeth are sharp, little lambs."

"Hunt-Father! We offer you with this worthy prey!"
"May their blood stoke your hunger!"

Once Gherig and his Attendants of Blood and Flame are dead, the Earthgore Amalgam will be form in the center of the forge.