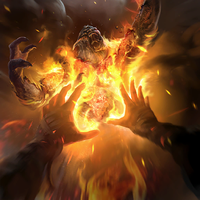 The school of Destruction is one of the six schools of magic. It is concerned with dealing damage to all forms of matter, both living and non-living, and with making matter more vulnerable to such damage. Mastery of Destruction magic may bring a certain amount of danger.

Although these are the basic types of effect, other effects such as the damage inflicted by the sun upon vampires are often studied by mages skilled in Destruction magic. Many diseases can be viewed as a form of Destruction magic.

Sometime between late 3E 399 and 3E 426, an Illusionist named Berevar Bero gave a speech in the Imperial City in which he suggested that the School of Destruction is not a true school and should be merged into the School of Alteration. After Bero decided to have the speech printed and it caught the attention of academics, a battlemage named Malviser delivered a particularly stinging rebuke.[1] In 3E 431, the Council of Mages decided that Destruction magic in Cyrodiil was to become the responsibility of the guildhall in the town of Skingrad.[2]