The UESPWiki – Your source for The Elder Scrolls since 1995
< Lore: Artifacts: H
Jump to: navigation, search

The Heart as depicted in Morrowind

"But when Trinimac and Auriel tried to destroy the Heart of Lorkhan it laughed at them. It said, "This Heart is the heart of the world, for one was made to satisfy the other." So Auriel fastened the thing to an arrow and let it fly long into the sea, where no aspect of the new world may ever find it.'" — The Monomyth

"Beneath Red Mountain, Dwemer miners discovered a great magical stone. By diverse methods, Lord Kagrenac, High Priest and Magecrafter of the ancient Dwemer, determined that this magical stone was the heart of the god Lorkhan, cast here in the Dawn Era as a punishment for his mischief in creating the mortal world. " — Kagrenac's Tools

The Heart of Lorkhan was the "divine spark" of the deity most commonly known by his Aldmeri name, Lorkhan.[1][2][3] It appears in other cultures as concepts such as Heart of Shor,[4] the "hunger" of Sep,[3] and others. The "star-wounded East"[5] gained its name when the Heart fell from the sky like a meteor,[6] crashing into the Vvardenfell region in ancient times, where it formed Red Mountain.[7] In the mythology of the Towers, the Heart of Lorkhan was known as the First Stone, the Stone of Red Tower (Red Mountain).[UOL 1][8]

The Heart of Lorkhan was discovered in the First Era by the Dwemer, who fashioned tools to harness its power.[9] The Dwemer wanted to use this power to create a new god of brass, but disappeared before it could be activated.[10] The Heart was later used by the Tribunal and Dagoth Ur to become gods themselves.[11][1]

Every Tamrielic mythic tradition has an archetypal Missing God in its pantheon. This god is credited with convincing or tricking the Original Spirits into creating the Mundus, the Mortal Plane. He then died or was killed for doing so, was separated from his "divine center", and left to wander creation in this state.[3] Examples include: 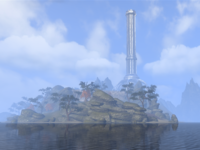 Red Mountain, where the Heart of Lorkhan came to rest

After the Mundus was created during Convention, Lorkhan was slain by Auriel and Trinimac atop Adamantine Tower;[14] it is said Trinimac reached into Lorkhan and tore out his Heart with "more than hands".[3] However, the Heart laughed at them and refused to die, for it was one with the new world. Instead, Auriel fastened the Heart to an arrow and shot it across the world into the sea.[3][14]

Ruptga, the Tall Papa of the Yokudan pantheon, created Sep out of past worldskins shed by Satakal, the First Serpent. Though Sep shared some of the hunger of Satakal, he helped Tall Papa guide the other spirits to the Far Shores where they could avoid being eaten by First Serpent. Eventually, Sep grew tired of this, gathered all the old worldskins into a ball (the Mundus), and convinced many spirits to live there. However, they eventually began to die, and found it was no longer possible to reach the Far Shores. Ruptga refused to help them, telling them they had to find new paths or live on through their children. He also punished Sep, beating him to death with a stick, whereupon his hunger (the Heart of Lorkhan) fell out. The Second Serpent was left to "slink around in a dead skin".[3]

In the Khajiiti tradition, Lorkhaj was the last of Fadomai's many children, and his Heart was filled with a Great Darkness which was given the name Namiira. Before her death, Fadomai told another child, Nirni, to bear many children. But Nirni had no place for them, so she sought Lorkhaj for advice; Lorkhaj created a place for Nirni and put her there to give birth. But due to the Great Darkness in his Heart, Lorkhaj was influenced to trick his other siblings into going there as well, and they became trapped. Some of Fadomai's children died to stabilize the new world, and the survivors punished Lorkhaj for his trickery by tearing out his Heart, hiding it deep within the new world, and cursing him to "walk Nirni for many phases".[15] Some ancient songs attribute Merid-Nunda as being the one that convinced the siblings to enact revenge.[16] Ancient Khajiiti scriptures predating the Riddle'Thar Epiphany state that Lorkhaj survived this event, and fled to Azurah with the hole in his chest. Azurah saw that Namiira still dwelled within his wound, keeping him alive and corrupting him by imitating his heart. Azurah cleansed Lorkhaj of the corruption and flung his Dark Heart into the Void, and Lorkhaj perished within Azurah's embrace.[17] From the Dark Heart came the twisted shade of Lorkhaj known as the Moon Beast, the first dro-m'Athra. And so Lorkhaj represents the duality of Khajiiti souls and their susceptibility towards the Bent Dance.[18][19]

The Reachmen creation story speaks of Lorkh having an epiphany when he visited the darkness; that what is perceived as nothingness is ripe for possibility.[20] And so, Lorkh approached Namira, who ruled the world of spirit. Lorkh convinced her to grant him a place in the infinite void to create a realm for wayward spirits. To make this a possibility, Lorkh sacrificed himself to create a harsh realm, one that is unforgiving and intended to teach through suffering.[21] Although his endeavor led to his sundering, Lorkh "still believed in the light of Man", whose ancestors fled into the mountains from the darkness emitted from Lorkh's heart.[22] Thus, to the Reachmen, Lorkh serves as an example to fight against the darkness in their hearts.[23]

A more prosaic theory claims the moons, Masser and Secunda, were and are the two halves of Lorkhan's "flesh-divinity'" (his literal body). Where the other Eight Divines (here represented as plane(t)s) each gave a part of themselves to create the Mundus, Lorkhan's plane(t) was split in half; his divine spark fell to Nirn as a literal shooting star, in order to "impregnate it with the measure of its existence and a reasonable amount of selfishness."[6]

At some point by the early First Era, Dwemer miners discovered a mysterious, magical stone beneath Red Mountain. The Dwemer Tonal Architect Lord Kagrenac determined that this stone was the Heart of Lorkhan, and constructed a set of tools to harness its powers. His goal was to create a new god for the Dwemer—Anumidium.[1][9][24] This god took the form of a colossal brass golem called Numidium,[25] and was the key to the Dwemeri bid for ascension, be it godhood, immortality, or something greater.[24][26][UOL 2]

By some accounts, Kagrenac constructed Anumidium without the knowledge of the Dwemer King Dumac. The Chimer learned of it, however, and Dumac's claims of innocence when confronted by his friend Lord Nerevar sparked the War of the First Council.[24] The war culminated around 1E 700 with the Battle of Red Mountain; while again accounts vary widely, most agree that Nerevar, Dagoth Ur, and others made their way into the Heart Chamber beneath the Dwarven citadel.[4][11][24]

In the ensuing battle, Kagrenac (or Dagoth Ur, by Azura's instruction) used the Tools on the Heart of Lorkhan, which caused the Dwemer to immediately vanish from Nirn.[9][24] Nerevar died (or was murdered)[24] soon after, the Tribunal took possession of Kagrenac's tools, and used them to tap the Heart to fuel their apotheoses,[9][24] and thereafter made an annual pilgrimage to the Heart Chamber to recharge their powers.[12]

In 2E 882, Dagoth Ur, who was believed to have died beneath Red Mountain during the battle, reawakened, along with numerous members of the Sixth House, also thought wiped out during the battle. They seized control of the Heart Chamber, and Dagoth Ur bound them all to the Heart of Lorkhan, himself included, through unknown means. The Tribunal were driven off when they made their annual pilgrimage, and henceforth could no longer renew their powers. In an apparent adoption of the views and motivations of Kagrenac, Dagoth began construction of a Second Numidium, Akulakhan, to be powered by the Heart of Lorkhan.[12]

In 3E 427, two of Kagrenac's tools, Keening and Sunder, were stolen by the forces of the Sixth House.[12] The same year, an outlander sent by Emperor Uriel Septim VII arrived in Vvardenfell, and was believed by many to be the reincarnation of Nerevar—the Nerevarine. After many trials, the Nerevarine recovered Kagrenac's stolen tools and used them to disrupt the enchantments on the Heart of Lorkhan,[27] destroying Dagoth Ur and Akulakhan in the process.[1] Some claim that the Heart of Lorkhan was destroyed,[28] though Azura claims it was merely freed from its prison[29] of the mortal plane.[UOL 3]

Many years prior to 4E 201, the Heart was rumored to have been found by an unknown entity and sealed within a Dwemer lockbox buried deep in the ice in the Sea of Ghosts.[30] The renowned scholar Septimus Signus uncovered the lockbox and spent many years attempting to open it.[31] He succeeded in 4E 201 with the help of the Last Dragonborn, but was turned to ash upon discovering his folly: the lockbox did not contain the Heart of Lorkhan, but rather the Oghma Infinium, an artifact of Hermaeus Mora, who had manipulated Signus for all those years.[32]