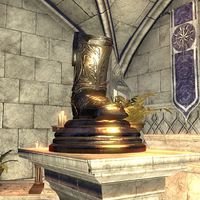 A shrine to Phynaster, symbolizing his walking stride

Phynaster the Guardian[1] is the hero-god of the Summerset Isles. While he is not part of the main of Aldmeri Pantheon, his worship persist through significant cults throughout the province. He taught the Altmer to extend their lives a hundred more years, simply by shortening their stride.[2] Phynaster is associated with the Ring of Phynaster, that comes and goes throughout time between different warriors. It is said to be the source of his longevity,[3] but it may have also been his undoing. It was rumored that the Wharf Rats killed Phynaster for his ring and when he was buried at the Forest of Elborn, they took it for themselves.[4] However, this conflicts with Altmeri, Falmeri and Bretonic accounts of him being a deity.

In the early years of Aldmer colonization on the Summerset Isles, they shifted the focus of their religion from their ancestors to the ancestor spirits, the Aedra. Among the many spirits were Phynaster, as well as Auri-El and Trinimac. The elders that opposed this change went on to become the Psijic Order.[5] Many of Phynaster's followers take a pilgrimage through dangerous areas across the province, such as the King's Haven Pass as tests of faith, but several perish in the attempt yearly.[6] While Phynaster is worshipped by the Altmer, he is also venerated by the Snow Elves[7] and the Bretons, the latter of which is a carry-over from their days as retainers of Clan Direnni, who saw the hero-god as their teacher and patron deity. He is mainly worshipped by Breton mages that emphasize their elven heritage.[8]