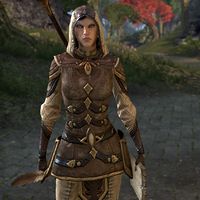 Captain Landare is an Altmer First Auridon Marine who is helping defend Dawnbreak. Before starting the related quest, she is discussing the missing citizens with the canonreeve:

As Dawnbreak is overrun by daedra, she'll at first try to warn you away:

"Hold. Dawnbreak is in the middle of an evacuation. No one's allowed back in."

"Daedra. Poor town was devastated by the beasts. We managed to crush the assault, but the place is still a mess. We need to get the villagers clear so recovery efforts can begin."

Any way I can pitch in?

"Certainly! I appreciate the help. I was going to send a squad for these citizens. Got a list here. Meet me at the manor house in the middle of town when you've mustered them out."

This starts the quest.

"Good luck in there. And mind the Banekin. They're like little Daedric rats."

"Only Auri-El knows. Dawnbreak's a supply stop between Firsthold and Skywatch, no different than any other town in Auridon. Just glad the High Kinlady wasn't here when they hit. She left an hour or two before we saw the first Daedra."

"No! Truly? Thrice-be-damned is she. If she's capable of that kind of treachery, perhaps she had a hand in what's happening here."

Look for the townsfolk on the list, then return to the captain.

"I saw some of the townsfolk making for the cordon. How did it go?"

I freed all I could. Almion, Elannie's father, was already dead.

"Poor girl. Thank you, for what you could do. In the meantime, I've sent out patrols to hunt down any remaining Daedra. They should report back soon."

Anything else I can do while I'm here?

At this point, Sergeant Artinaire enters.

Talk to her again.

What's the next move?

"Get out there and look for our patrols. They'll need relief. I need to oversee the defense here. May Auri-El preserve us, all."

"Good luck out there."

You look for her inside the cave near Dawnbreak at the sergeant's request, she is found next to the injured Qoramir.

"You're here. This is Qoramir, my patrol leader. He isn't having a good day."

What did he find?

"There are a pair of Dremora further up in the cave. They're preparing another mass summoning as we speak. It's up to you. I can't leave Qoramir here like this."

I'll take care of them, Captain.

"Thanks. You were right, by the way. Estre's not just Veiled Heritance—she's a thrice-damned cultist as well! Qor overheard the High Kinlady talking to these Daedra by magical sending."

Another crime for the magistrates. I'll track her after we deal with these Daedra.

"Good. Meantime, I'm going to get Qor here back to the manor. Meet us there."

See you there, Captain.

If you talk to her here again, she'll say: "Succeed where I failed." Stop the ritual and return to the manor.

"My new friend! You live. I was hoping. As you can see, we received reinforcements. The Dremora have been dispatched?"

The ritual is broken. There won't be another attack.

"Thrice-blessed are we. I couldn't have asked Urcelmo for a better Marine. What of Estre? Did you learn anything more?"

"I had a feeling things would get worse. We need to get word to Lord Rilis of Firsthold. And fast."

Can you get a warning there in time?

"We'll just have to see, won't we? In any case. For the lads and lasses here—thank you."

This completes the quest. Should you talk to her again after this, she'll say: "I hope we're in time."

This Online-related article is a stub. You can help by expanding it.
Retrieved from "https://en.uesp.net/w/index.php?title=Online:Captain_Landare&oldid=1843519"
Categories:
Hidden categories: