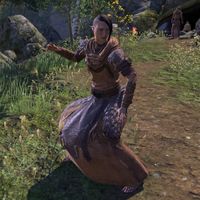 A member of the Circle

The Firesong Circle is the oldest[1] and most hostile of the three prominent Druidic Circles in the Systres Archipelago,[2] where they live on Y'ffelon where outsiders aren't welcome. Their religion is centered around the island's volcano, Mount Firesong,[3] where they hear Y'ffre's voice in its restlessness.[4]

The Oakensoul Ring artifact showcases druidic master craftsmanship with some Direnni influence. It represents the authority of the Draoife, and its power comes from the various components that make up the ring's anatomy. The ring's oaken loop is accented with enchanted igneous flakes representing the Firesong Circle, theorized to bring immovable strength.[3] They were known for their therapeutic soaking salts harvested from one of the Systres' hot springs. It was believed that they were used to put both mind and body at ease.[5]

The Firesong along with the Eldertide and Stonelore circles, originally made up the unified group known as the Druids of Galen before they dissolved into these three major sects, each with their own interpretation of Y'ffre's will.[4][6] Despite the religious schism, to symbolize their unity matters more and that they share the same goals, the druidic circles came to shaping knot-work into a triquetra,[7] a symbol that would become adopted by civilized Bretons.[8]

The Allwither Order was created by Firesong Circle heretics who possibly wanted to enact revenge on the Direnni.[9] They killed Kasorayn the last Druid King when they attempted to seize the Ivy Throne,[10] but the Allwither heretics were defeated.[10]

The Dream of Kasorayn foretells of druiddom retaking their place in Tamriel. A possible future where the druidic circles reestablish themselves as the Druids of Galen after uniting under the banner of a new Druid King.[UOL 1][UOL 2][11][12] Circa 2E 582, the Firesong Circle attempted to forcebly unite the druidic circles and reclaim the Systres from the Tamfolk. They assassinated the Draoife when they refused to elect a new ruler, and made moves to obtain the other circle's seeds. The leader of the Firesong was disposed of, but the puppeteer and leader of the Ascendant Order, Lord Bacaro Volorus, took matters to his own hands and took the Ivy Throne. Bacaro's reign was swiftly put to an end by the Vestige, and thus the Green Scourge was prevented.[13]

This Lore-related article is a stub. You can help by expanding it.
Retrieved from "https://en.uesp.net/w/index.php?title=Lore:Firesong_Circle&oldid=2695616"
Categories:
Hidden categories: