Jhim Sei is an unknown deity that has a presence in the Iliac Bay, primarily in the province of High Rock. The nature of Jhim Sei is unknown, although their sphere of influence may revolve around music, since he is compared to Jephre, the Elven God of Song and Forest in the historical-fiction, King Edward.[1] By 3E 405, there are shrines dedicated to Jhim Sei across High Rock and even in remote places like the Dragontail Mountains in Hammerfell.[2] 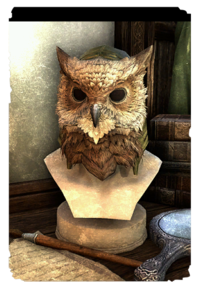 The Nordic god of hermetic orders and knowledge, represented by an owl.[3] After falling out of favor with the rest of that pantheon, he became Julianos of the Nine Divines. He is absent in modern Skyrim mythology.[4] Wise-Wing the Owl is associated in northern Tamriel with Jhunal, and is said to warn the unwary away from graveyards and witches' covens during the New Life Festival.[5] Vivec mentioned "JHUNAL" as one of the eight known worlds.[6]

Aldmeri god of the Big Moon. Also called Masser or Mara's Tear. In Khajiiti religion, Jode is only one aspect of the Lunar Lattice, or ja-Kha'jay.[4]

Aldmeri god of the Little Moon. Also called Secunda or Stendarr's Sorrow. In Khajiiti religion, Jone is only one aspect of the Lunar Lattice, or ja-Kha'jay.[4]

Julianos, God of Wisdom and Logic[edit]

Julianos, Aedric God of Wisdom and Logic, is one of the Cyrodilic Divines, governing the realms of literature, law, history, and contradiction. He is usually associated with magic, and thus is often revered by wizards. Jhunal, the Nordic father of language and mathematics, fell out of favor in the Nordic pantheon, after which he became Julianos of the Divines. Monastic orders founded by Tiber Septim and dedicated to Julianos are the keepers of the Elder Scrolls. He is particularly venerated among many Imperials and Bretons. As a Divine, he represents the virtue of learning, scholarship, and justice. His domains include sorcery, alchemy and enchantment. He is said to "incant the Damned Equation". His symbol is a triangle.

Jyggalag, the Prince of Order, is a Daedric Prince whose sphere represents logical order and deduction; his great library once contained a logical prediction of every detail of the world and of every action that would ever take place on Mundus or Oblivion, long before they actually happened. Until the Third Era, the Prince was virtually unknown in Tamriel beyond his name, having been cursed in antiquity to become the Prince of Madness, Sheogorath. After the events of the last Greymarch, Sheogorath and Jyggalag are no longer the same Daedric Prince, however they are still connected in other ways.

It is said that the Daedra fear wisdom and order, and for his similarities to Jyggalag's principles, they feared Sotha Sil above all others. Apostles of Sotha Sil noted that of all the Daedra, only the "Gray Prince of Order" knew his nature, and went mad in the knowing.

Jyggalag commands his own Daedra, the Knights of Order, which are spawned from obelisks summoned by his followers, the Priests of Order. Together, they constitute the Forces of Order. He is viewed as stern, bleak, and colorless, with him and his soldiers lacking originality.