Dagon[1] (or Daegon)[2] the Demon Cat, also known as Merrunz[1] the Fire-Cat[3] (or Mehrunnez)[4] is the Khajiiti version of Mehrunes Dagon. A child of Fadomai's Second Litter, Merrunz became "destructive and wild", and was exiled by his father, Ahnurr. Rather than the Many Paths, he chose to explore the Great Darkness, and there was captured by Molagh and tortured until the creation of the World. It is said he was eventually freed by Molagh's wife, and used to assault the Lunar Lattice. As a result, Merrunz happily became a kinslayer, and as a result is now known as the demon Dagon.[1] 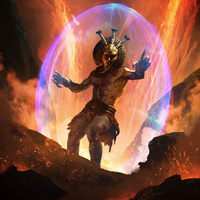 The Deep Ones are a race of beings who dwell deep underground beneath the town of Hackdirt, an isolated settlement in Cyrodiil's Great Forest. They are worshipped as gods by the inhabitants of Hackdirt, who built the Chapel of the Brethren in their honor. Worshippers who have changed the most are known as the Brethren, and dwell underground in the Hackdirt Caverns to be closer to the Deep Ones. The other residents descend down into the caverns at night for "Gatherings" where they worship the Deep Ones; tunnels were dug connecting each house to the caverns for this purpose.

Diagna, (also known as the Orichalc God of the Sideways Blade) was an avatar of the HoonDing (the Yokudan God of Make Way) that achieved permanence as a Redguard sword-god. His "hoary thuggish cult" originated in Yokuda during the Twenty Seven Snake Folk Slaughter. He was instrumental to the defeat of the Lefthanded Elves, as he brought orichalc weapons to the Yokudan people to win the fight. In Tamriel, he led a very tight-knit group of followers, called the Order of Diagna, against the Orcs of Orsinium during the height of their ancient power, but then faded into partial obscurity. He is described as now being little more than a local power spirit of the Dragontail Mountains but he is still worshipped as of the 4th Era, being part of the Eight of the Crowns.

High Kings of Hammerfell are crowned on the Throne of Hegathe by wearing the Diadem of Diagna. Warriors of the Order of Diagna carried armless stone effigies of Diagna during the siege. The Daggerfall Covenant's alliance of the Orcs and Redguards was alleged by the Unveiled Azadiyeh to have inflamed Diagna's very sword-arm with the Crimson Rash of Betrayal.