The UESPWiki – Your source for The Elder Scrolls since 1995
< General: The Dragon's Eyrie
Jump to: navigation, search
Click on the logo below for information about it's [sic] creation and other interesting behind the scenes info!

Daggerfall, the award winning CRPG, was the first major title I worked on at Bethesda. For it's [sic] time the graphics received some praise but I always thought that they were lacking in a coherent style, not surprising after 2 and half years and 20 artists that had come and gone! I think there were about 3 of us who stayed on it until the end. I was responsible, as were most artist [sic] there, for a whole host of stuff. Character portraits, Logo design, textures, monsters, NPCs, Animation sequences, manual design. Most of it was a rush job, trying to get the job done by the deadline only to have it move forward again,and almost everything was redone at least once. (including the engine!)

Still, out of the mayhem came an award winning game. Perhaps even a classic. I've included some of the stuff here for you to see. Bethesda's video compression left something to be desired so where possible I've used the original render for the animation sequences. Bethesda have since upgraded to Smacker , which they are using on the forthcoming Redguard title.

The above image is meant to represent the inside of a mage's tower. It's intended to tie together all the Elder Scrolls titles. This is where the scrolls are held. Part of the model is reused in the Redguard intro, so keep your eyes peeled!

Lysandus' spirit is finally put to rest. The image on the right comes from an animation in which Lysandus and his skeletal spirit army are blown away by some magical wind. During work on the animation the design for castle Daggerfall in the background was changed and the model had to redone!

The Death Sequence If you've ever played Daggerfall you've seen this scene a few times. The Death sequence. You body is bourn [sic] by mages to your final resting place as a crow watches over. The mage modeling and animation is mine, as is the lighting and texturing. The crypt and landscape was modeled by Dave Plunkett. Tamriel's twin moons, Masser and Secunda, look down on the somber proceedings.

Here to the right is a larger version of the mage/druid.

Horse Although never used in the game the horse and rider was going to feature heavily in the game with combat on horses, and jousting. Like many other things it never made it. The original model I made was terrible! A fact that I was pointed out to me by Judy Weller, a tester for Bethesda.

I remember she would come in daily to check my changes! I have to thank Judy for her criticisms though, the final result is much better and I was pleased to have it go in the game. It didn't of course, but what's an artist to do!?

It actually made it to the final CD and was on the back of the box until very late in the day. If you take a look at any of the old advertising for Daggerfall you'll find the shot. Oh well...Perhaps Morrowind will implement it. 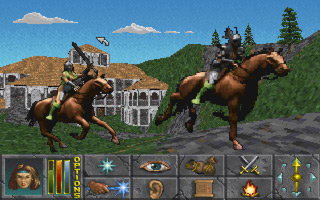 What could have been. Daggerfall was an exceptionally ambitious game. We all hoped and believed these horses would make the final cut. This is an early screen. The skies would later be replaced with some i [sic] created in Alias.

This is how I imagined the horse and rider in game. It would have been great to have that extra fluidity in the game, but despite creating the animation, having that all fit within memory was really never going to happen.

I had multiple riders, in all combinations of clothes and armor, male and female, all rendered out in multiple directions. I would set it all up during the day, write a bunch of batch files and let the SGI render over night. Next day I would come in and start the task of 'Sprite'n'izing' them all.

The Lich king's tomb. This was also used on Bethesda's first website, which itself was modeled on a small Tamriel town, with each area representing a different aspect of the site. I forget what the tomb represented. If anyone out there still has any of the other images I would be very grateful if you could send me a copy! Most of the graphics that were not used in Daggerfall are gone forever, such as the real time 3D dragon, although it's [sic] skin still remains on the Daggerfall disk for all those with Andypic out there!

The Lich king's tomb. Lysandus Awakes. A major plot point in the game where the spirit of lysandus [sic] is roused from his eternal slumber and sets you on a quest. [sic] from scratch again.

The model of the skeleton was from viewpoint datalabs. We were concerned that all teh [sic] assets would not be completed on time, and so to save time we used a pre exisiting [sic] model, with modificatiosn [sic]. later, [sic] for Morrowind I would create a new Skeleton, and I beleive [sic] it might even have found it's way into Oblivion after that. For a long time the skeletons in Daggerfall were hand-drawn. Players of Daggerfall may notice the strange mix of hand drawn and rendered characters. Originally after some disappointing experiments with 3D characters in Arena it was decided to use 2D for Daggerfall. After some new tests were done with the SGI's and Alias, 3D was again chosen. By that time over half the monsters had been drawn in 2D and so we set about creating them [sic]

The mesh was bought because of perceived time constraints. It was thought building the model would take too long. The average time for each monster was about one a day at that time. The 3D mesh was somewhat expensive, hence the amount of times it appears in the game, Lichs [sic], Skeletal warriors, zombies, demo death sequences, Battlespire textures!

Character Work As a general rule standing characters were created as traditional hand drawn sprites. Characters that would be seen from multiple angles and were able to walk were developed as 3D characters and then rendered out as sprites, with touch ups as necessary. Hand creating this [sic] characters from very [sic] angle would be a huge amount of work. I mostly handled the 3D characters but I did created [sic] a few traditional style characters too. Here's one, and again it represents my pixel style at that point in time. This was created early on. Later the hand drawn sprites were doubled in size, but this fella stayed true to his pixel roots!

Our hope was to have more frames of animations for these 3D characters, and possibly larger versions too. That way the character would scale better in the world, and not become too pixellated [sic] once up close. Creating them in 3D allowed us the ability to change frame amounts, and size very quickly, especially when compared to creating them all again by hand. Imagine the horse and rider seen at the top of this page. If we had been fortunate enough to have that amount of frames, and had to create them all by hand...I [sic] frightening thought!

The Dreugh, pictured on the left, was one of the last characters to be designed. We decided that there was not enough variety in the underwater creatures so the dreugh was added to "pep" things up a bit. Its original design came from a sketch by Mark Jackson, who also worked on sketch work for Battlespire and Redguard. Once a Bethesda employee he left after Daggerfall to become freelance once again.

Centaur. The horse may not have made it into the game but the 3D mesh was used to design the centaur to the right. All of the Daggerfall characters were animated with at least 16 frames for each cycle. Unfortunately most of that animation had to be cut out to fit the graphics into the game. The high frame graphics are now lost as Bethesda has changed networks since that time and a complete backup was not made.

Frost and Fire Daedras [sic] The fire Daedra, as does the Frost Daedra below, makes extensive use of Alias' particle system. It looked so nice in the test renders! Again due to the every present memory restraints it had to be chopped back quite a bit. Both characters went on later to reappear in Battlespire, although by then they will have doubled in size, and have more frames. Still that was not enough for many who thought that they still appeared too "pixelated".

The gargoyle. This was one of the first creatures I designed for Daggerfall. In its original rendering it was far more human like, and much less threatening. With the ever shifting Daggerfall deadline it became obvious that the artists were going to have much longer to tweak the graphics than we had anticipated . So I decided to go ahead and redo the graphic, and tweak many more.

Orc Witch Doctor This character, a variation on the standard Orc, was completed late in Daggerfall's development. By the time I had a better grasp of modeling, texturing and lighting so I believe that this is one of my favourite [sic] characters from Daggerfall. Bare [sic] in mind that all the human-like figures that you see here are based on a model I made after only two weeks of using Alias. They were later refined for Battlespire, I gave them fingers and better proportioned bodies, but I always felt that I should just find the time to redo them completely. Unfortunately on Daggerfall the schedule only allowed at Maximum 2 days for a character, including modeling, animating, rendering, and finally getting the graphics into a format that the programmers could use.

Duids [sic] The 3D rendered characters started life as fairly detailed models. They were never meant to be seen large, so no fingers and toes, and other small details such as buttons, but we could add pockets and belt buckles, which could still hold up to viewing at a small size. The frames available were cut back to save memory, here are a couple that show the original walk animation before we cut them down to 4 frames. What these animations show is the effect of light coming from the druids' staffs and interacting with the clothing. This get [sic] somewhat lost in the in-game animations.

The winged Seducer test animation. AS [sic] with all the graphics animation frames had to be radically reduced to make way for all the graphics. So the horse and this seducer were never seen in game in this way. It's nice to be able to show some of this stuff off now after all these years. One little thing... I did complete a 3D dragon for Daggerfall. A low polygon model, animated and textured. All that remains of that are some rogue textures and this animation, which I used as a basis for the wing flap.

Her [sic] she is. Not too bad detail wise. This was late in Daggerfall production. The combination of 3D and 2D touch up working [sic] quite well. Soon after we began to work on purely 3D games, I worked on Terminator: Skynet and it's interesting to compare the sprites here and the low polygon character work there. Battlespire was the last of these sprite based 3D games. Redguard was produced at the same time and I think works better graphically. I was very fortunate to have worked on all those projects. Very fortunate indeed.

All graphics on this page are copyright Bethesda Softworks 1996/1997/1998
Retrieved from "https://en.uesp.net/w/index.php?title=General:The_Dragon%27s_Eyrie/Daggerfall&oldid=2357690"
Category: