There are eight playable races in Arena, each with different characteristics. It is important to choose one that will complement your character's class, though it is not a necessity. Before the game starts, you are shown a map of Tamriel, which allows you to choose which race you want to be by clicking on the appropriate province (there is no race associated with the Imperial Province). When you exit the Imperial Dungeons, you will emerge in the homeland of whichever race you choose to be. Each province and it's associated race also has a distinct set of Exclamations the NPCs of that province will use when interacting with you.

Provinces and Their Native Races[edit]

The table below shows from what province each race originates. 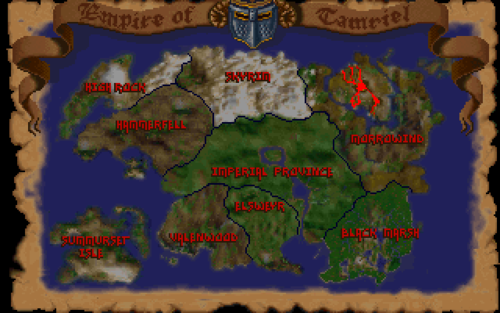 Arena's map of Tamriel. From where dost thou hail?

Here is a brief description of each of the races, their strengths, and their suitability to a particular class.

Customizations for a male Argonian

Customizations for a female Argonian

"Thou hast chosen Black Marsh, land of the Argonians."

Argonians are a highly evolved race of reptilians, at home in any marsh-like environment from which they hail. They are known for their intelligence, agility, and speed. Because of their reptilian nature, Argonians do not tire easily while swimming, and seldom drown. They can also swim faster than any other race. They are adept in any art involving the arcane, or involving thieving and sleight of hand.

Upon selection of the Argonian race, the player is informed with the following concerning Argonians:

Know ye this also:
Thy race is born of the swamps, thou hast stayed thyself from the open fields, for thou art hunters of a different sort, those who stalk thy prey in the still black waters...

Customizations for a male Breton

Customizations for a female Breton

"Thou hast chosen High Rock, land of the Bretons."

Bretons are a tall, dark-haired people. Bretons are highly intelligent and willful people, and have an outgoing personality. It is said that Bretons are weaned on magic, for it seems to suffuse their very being. As a result Bretons take half damage on any Magic based attack, and no damage on a successful save. They are excellent in all the arcane arts.

Upon selection of the Breton race, the player is informed with the following concerning Bretons:

Know ye this also:
Thy race is descended from the ancient Druids of Galen, quick witted and strong in the mystical arts. Thy folks are crafty and intelligent, a learned people who use their gifts to guide others to enlightenment...

Customizations for a male Dark Elf

Customizations for a female Dark Elf

"Thou hast chosen Morrowind, land of the Dark Elves."

Dark Elves are a tall, dark-skinned people with red, glowing eyes. They are known to be extremely strong and intelligent, and very quick. Dark Elves seem innately tuned to weaving magic with weapons. Dark Elves receive their (level / 4) as a bonus to hit and damage with any melee or ranged weapon. They are adept in any art involving the blade and shield combined with the arcane arts.

Upon selection of the Dark Elf race, the player is informed with the following concerning Dark Elves:

Know ye this also:
Thy race is as deadly as the thorns of the black rose which blooms only in thy mother's breast. Thou hast all that is graceful in thy brothers of the day, yet thy mother is the moon, and thou art her children of the night...

Customizations for a male High Elf

Customizations for a female High Elf

"Thou hast chosen Summurset, land of the High Elves."

High Elves are a tall, golden-skinned people with almond-shaped eyes. High Elves are extremely intelligent, agile, and willful. High Elves seem drawn to magic as a moth is to flame. They have a natural affinity to its use, and often make quite formidable wizards. High Elves are naturally immune to paralyzation. They are adept in any art involving the arcane.

Upon selection of the High Elf race, the player is informed with the following concerning High Elves:

Know ye this also:
Thy race is tall and stately, for thou art kings among princes. Thy people were first on this land to breathe the spring air and first to leap, nimble with the wind. Thine eyes canst see all even when naught is out but the Mistress of the Night...

Customizations for a male Khajiit

Customizations for a female Khajiit

"Thou hast chosen Elsweyr, land of the Khajiit."

Khajiit are a fair-skinned people who are extremely hardy, intelligent, and agile. Legend has it that they descended from an intelligent feline race, for they still retain a strange cast to their features. Many Khajiit have taken to painting their faces to more resemble their distant cousins, the predatory cats that hunt the great desert. Khajiit are expert climbers, able to scale chasm wall sides with speed unmatched by any other race. They are adept at all arts involving thieving and sleight of hand.

Upon selection of the Khajiit race, the player is informed with the following concerning Khajiit:

Know ye this also:
Thy race is born of the desert, where life is cruel and harsh and death comes on vultures wings. Thou art feline and sleek, deadly hunters of the wastes...

Customizations for a male Nord

Customizations for a female Nord

"Thou hast chosen Skyrim, land of the Nords."

Nords are a tall and fair-skinned people who are strong, willful, and hardy. Living in their arctic environment has inured them to its effects, for they seem to shrug off all but the coldest of attacks. Nords take half damage from Cold based attacks, and on a successful saving throw take no damage. They are excellent in all arts concerning the blade and shield.

Upon selection of the Nord race, the player is informed with the following concerning Nords:

Know ye this also:
Thy race is strong as the northern winds which sweep through icy glaciers. The arctic clime hast hardened thy folk for life's cruel and bitter hand...

Customizations for a male Redguard

Customizations for a female Redguard

Redguards are a stocky, powerful race that are known to be extremely hardy and quick. Legend has it that the Redguard are innately more proficient at weapons than any other race. Redguards receive their (level / 3) as a bonus to hit and damage with bows and daggers (despite what is stated in the manual).

Upon selection of the Redguard race, the player is informed with the following concerning Redguards:

Know ye this also:
Thy race is a people without a past, for in the Tiber War thou wert stalwart guardians of Hammerfell. As time moved on thy people held onto the ground for which they had shed tears of blood, and now the land, and the strength and endurance of rock itself, is thine own to command...

Customizations for a male Wood Elf

Customizations for a female Wood Elf

"Thou hast chosen Valenwood, land of the Wood Elves."

Wood Elves are a people of the forest, matching their features to all that is found growing in the green woods of their homeland. They are known to be extremely agile and quick. Wood Elves receive their (level / 3) as a bonus damage with melee weapons (unlike what the manual says). They are well suited towards any class, although their nimbleness serves them best in any art involving thievery.

Upon selection of the Wood Elf race, the player is informed with the following concerning Wood Elves:

Know ye this also:
Thy race is one with the forest and its creatures, and thy strength flows from the mother earth itself. Thou art one with the world...