Legacy of the Bretons

The Legacy of the Bretons is the sixth main story arc of Elder Scrolls Online, following on from the Gates of Oblivion. It is an overarching story which spans multiple content updates in the form of DLC, Chapters, and free quests, covering the entirety of 2022's content releases. Details of the plot were officially announced on January 27, 2022. Legacy of the Bretons takes you to the the Systres to unravel a plot threatening secret peace talks to end the Alliance War.

On January 5th, a teaser trailer was released showing ships belonging to each of the Alliances traveling to High Isle.

Due to the multiple content releases involved in the Legacy of the Bretons, there are no prerequisites for completing these quests and they can be done in any order. However, they do follow a chronological order as listed here. 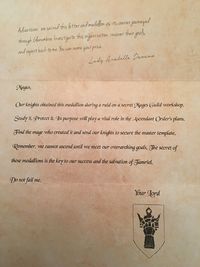 A letter warning of the Ascendant Order