The UESPWiki – Your source for The Elder Scrolls since 1995
< Online: Places: Summerset / Ruins / Delves
Jump to: navigation, search

In Aldmeric, the name means Warlord's Mountain Lair, as these vast halls were originally built in the early First Era for the legendary Prime Battlereeve Fiirfarya. One morning the estate's entire populace was found slaughtered, and thereafter the site was abandoned. 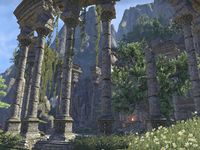 Tor-Hame-Khard is a delve found southwest of Shimmerene. It is occupied by the Sagacians, a group of researchers who, according to Justiciar Tanorian, are "truly no better than bandits", using any means to obtain their ends.

In the northernmost chamber, a chest can be found at the top of the stairs, which lie in the northern portion of the room.

This Online-related article is a stub. You can help by expanding it.
Retrieved from "https://en.uesp.net/w/index.php?title=Online:Tor-Hame-Khard&oldid=2187383"
Categories:
Hidden categories: