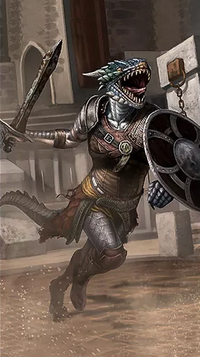 The An-Xileel are a political party in Black Marsh formed sometime during the Oblivion Crisis, consisting primarily, if not entirely, of Argonians. They supported Black Marsh's independence from the Empire and were said to spread anti-Imperial propaganda, capturing prisoners of war. Many Argonians firmly held the belief that the An-Xileel were the sole reason that Mehrunes Dagon failed to conquer Black Marsh during the Oblivion Crisis.[1]

According to the Imperial perspective, the An-xileel “were entirely nativistic in their views, interested only in purging the former colonial influences” and returning Black Marsh to Duskfall, the state they imagined it had been in before it was ruled by foreign powers.[2] They refer to Argonians who have been living under Imperial ways as "Lukiul", or "Assimilated". The few non-Argonians that work for them are poorly paid advisors.[1] The An-Xileel are untrustworthy and desire for others to believe that the organization is something that it isn't.[UOL 1] Many of those who have dealt with the An-Xileel view them as being uniformly rude and arrogant.[2]

The exact structure of the An-Xileel is unknown, but they were known to have had an Archwarden by the name of Qajalil in 4E 40,[1]:30 and were led by The Organism, the ruling council based in Lilmoth.[1][3] The province itself was ruled by the "King of High Marsh" well into the 2nd century of the Fourth Era,[4][5]:233 making it unknown whether the An-Xileel still existed following their role in the Umbriel Crisis.[2]

When the gates from the Deadlands opened in Black Marsh during the Oblivion Crisis in 3E 433, the Argonians poured into Oblivion "with such fury and might, Dagon's Lieutenants had to close them."[1]:19 Invaders from the An-Xileel participated in the Accession War around 4E 6,[6] capturing small parts of southern Morrowind that were once the "rightful" lands of Argonia. The An-Xileel stopped their advance in Morrowind after being pushed back by House Redoran,[7] and haven’t showed the slightest interest in doing anything since then. They have, however, prevented the Empire from reclaiming that territory.[2]

Cities within Black Marsh have been known to be under the control of the party, such as Lilmoth in Murkmire, defeating the Imperial forces and looting the Old Imperial Quarter, including the Hoïnart estate.[1]:14 They forbade all but licensed foreigners in the city.[1]:36 Only the An-Xileel and wild Argonians have complete access to the Lilmoth city-tree,[1]:45 and the An-Xileel talk only to Lilmoth's city tree.[1]:31 The An-Xileel have been observed to sing to the tree in a long, awful cacophonous chant.[2] Political enemies of the An-Xileel hid out in the Pussbottom district of Lilmoth.[1]:14 Only the topmost chamber of Ixtaxh-thtithil-meht Xanmeer jutted above the silt west of Lilmoth, as the An-Xileel had excavated it, room by room, pumping it out and laying magicks to keep the water from returning.[1]:35

In 4E 39, Magister Hierem made a secret trip to Black Marsh with Delia Huerc, ostensibly to negotiate with the An-Xileel leaders. Huerc was under the impression that the Emperor was aware of her and the Minister’s trip to Black Marsh, and that the “secrecy and misdirection were to avoid any of the Emperor’s enemies learning what he was about.” Though she did not witness the meeting with the An-Xileel, she worked out that some agreement had been reached, supposedly that Hierem was there to propose an alliance against the Thalmor, but he was vague about what the negotiations actually entailed. In order to seal the agreement, Hierem had to perform some sort of ritual at the city tree; it involved magic and the word "Umbriel".[2]

In 4E 43, by invoking the rogue Hist tree of Lilmoth into contacting its 'cousins' the Um-Hist, the An-Xileel were able to summon the floating city of Umbriel from the Fields of Regret, in order to exterminate all foreign taint and 'assimilated' Argonians in Black Marsh.[1] The city did this for them but soon began its own agenda after the An-Xileel lost control over it. Umbriel started on a northwestern path towards White-Gold Tower in the Imperial City, moving through Black Marsh and Morrowind in the process; those slain by the floating city were resurrected as an invincible undead horde to aid the city's dark goal. It was through the efforts of the Breton girl Annaïg Hoïnart, an Argonian named Mere-Glim, Prince Attrebus Mede, and the Dunmer mage Sul (along with a few others) that Umbriel was finally destroyed and its threat to Tamriel eliminated.[2]

The status of the An-Xileel following the Umbriel Crisis is unknown. In 4E 150, a small force of Argonian raiders landed on Solstheim to stir up trouble but were repelled by the Redoran of Raven Rock.[8] A Thieves Guild member also complained about Argonian patrols in southern Morrowind, implying the Lizard Folk have indeed begun some form of governance of those conquered areas.[9] By 4E 201, the province of Argonia was ruled by the King of High Marsh, putting into question whether the An-Xileel had any power.[4][5]:233