The following is a list of all known wars and conflicts during the Second Era. Most of these took place during the Interregnum (2E 430 – 2E 854).

There was a conflict between Yashnag's Chiefdom (an Orcish state in western Falkreath Hold) and the Nordic kingdom of Western Skyrim from c. 2E 435 to 2E 467. The conflict has no official name, and it is unclear when it started, but it began 'more than 30 years' before 2E 467 and must have started after the Sack of Orsinium and the Skyrim Schism in 2E 431.[1] 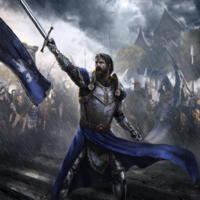 King Emeric of Wayrest had been courting Rayelle, daughter of King Ranser of Shornhelm, when he met and abruptly married Princess Maraya, daughter of the Redguard King Fahara'jad of Sentinel. Ranser was deeply offended, and withdrew his diplomats from Wayrest, surreptitiously raising levies and hiring mercenaries in Rivenspire over the course of a year.[3] Finally, in Last Seed of 2E 566, he swept down from the northern mountains, taking Emeric by surprise and nearly razing Wayrest immediately. Only the efforts of the king's personal guard saved the city, and forced a protracted siege.[2] Ranser's forces were insufficient to take the fortified city by storm, and so the siege dragged on as the tide of the war turned against him. Ranser's aggression was unpopular even among his own nobles, and several prominent houses of Rivenspire withdrew their military support and sued for peace.[4] While internal stresses took their toll, the original Daggerfall Covenant paid dividends, as Camlorn, Evermore, and Daggerfall were compelled to come to Wayrest's aid.

Meanwhile, Emeric was cannily leveraging his diplomatic connections. His recent marriage ties with the Redguards summoned a fleet of fierce warriors across the Iliac Bay, while an offer to restore Orsinium brought the Orcs into the fray.[2] Under Kurog gro-Bagrakh, the old enemies of Shornhelm burned Ranser's holdings and were waiting to prevent the troops' retreat from the advancing Breton and Redguard forces. Caught between the hammer and anvil at Markwasten Moor, Ranser's army was utterly destroyed. Only a select few were able to escape with the king, who retreated to a tor overlooking the smoking ruins of Shornhelm, hoping to make a last stand.[5] Driven to desperation, Ranser turned to dark sorcery, but was murdered during the ritual by one of his own generals.[6] The Crown of Shornhelm went missing during the chaos, and that evil place has henceforth bore the name Traitor's Tor.[7]

Also called the Liberation War by the Argonians.[9] A fleet originating from the Akaviri nation of Kamal, under the command of Ada'Soom Dir-Kamal, invaded northern Tamriel during the Interregnum of the Second Era. United by a common enemy, the Nords of Eastern Skyrim, the Dunmer of Morrowind and the Argonians of Black Marsh jointly defeated the Akaviri invaders and formed an unusual alliance, the Ebonheart Pact.

Heita-Meen, Jorunn, and Tanval Indoril at the Battle of Vivec's Antlers near Ebonheart, which led to the formation of the Ebonheart Pact.

There, on a beach of the Inner Sea just to the west of Ebonheart that would later be named Vivec's Antlers,[15] Dunmeri troops under the command of the living god Almalexia met and held them, while Jorunn and Wulfharth (and allegedly the Stormfirst Brigade[13]) pursued the Akaviri force into a surprise pincer attack.[11] The fighting was fierce, but the Nord army was overextended, and victory seemed uncertain until an elite Argonian phalanx of Shellbacks led by Heita-Meen[16] reinforced the Dunmeri army, turning a stalemate into a slaughter.[17] With the aid of a tidal wave summoned by Vivec, the Kamal were obliterated by the three unlikely allies.[15]
This conflict united three races who had held great animosity towards each other for centuries, leading to the formation of the Ebonheart Pact.[17] The Dunmer freed the Argonian slaves in recognition of their crucial aid.[8] However, the Nords of Western Skyrim did not join the Ebonheart Pact, as they had not been affected by the Second Akaviri Invasion and thus saw no need for an alliance, were skeptical that a Nordic–Dunmeri–Argonian alliance could work given their historic emnity, and had also been at odds with their fellow Nords of Eastern Skyrim for a long time.[11]

The Colovian Revolt, also known as Varen's Rebellion, was a rebellion against Emperor Leovic of the Longhouse Emperors by Duke Varen Aquilarios of Chorrol. Following Leovic's legalization of Daedra worship throughout the Empire of Cyrodiil, Varen Aquilarios marshaled the military forces of the Colovian Estates to depose him, triggering a widespread rebellion in 2E 576. Varen based his rebellion out of Bruma, where he coordinated his troops as they liberated Cyrodiil's other cities to further weaken Leovic's control. Despite his desire to fight on the frontlines, Varen instated his nephew Carolus to defend Kvatch, who repelled attacks from Longhouse-allied forces from Anvil and elsewhere. Meric Renmus pledged allegiance to Varen and was given the rank of general for his loyalty.

The rebellion claimed victory in 2E 577, when Varen's forces stormed the Imperial City and confronted Leovic's last legion in a bloody battle that razed the city's Market District. Varen personally dispatched Leovic at the foot of the Ruby Throne before proclaiming himself emperor. 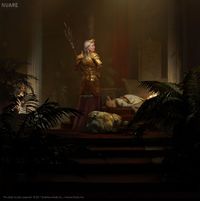 Euraxia Tharn entered Elsweyr as the Empire's envoy following the start of Varen's Rebellion. Received at Rimmen as an emissary of the new emperor at the head of a large contingent of Nibenese mercenaries, Euraxia turned on her hosts and deposed King Hemakar of Rimmen in the Frostfall Coup, slaughtering the royal family and establishing herself as queen.[18][19] From Rimmen Euraxia consolidated an iron grip over much of northern Elsweyr,[18] training siege weapons on her own capital to quell any signs of revolt from the local Khajiit.[20] Unbeknownst to Euraxia, however, Hemakar's daughter Khamira survived the Frostfall Coup, and would ensure her eventual overthrow after the Usurper Queen's attempt to ally with Kaalgrontiid and his rage of dragons in 2E 582.[21] 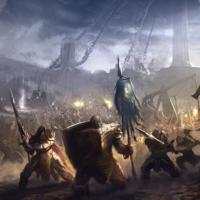 In the years leading up to the Three Banners War, also called the Alliance War or the Great War,[23] a divided Tamriel had witnessed a series of conflicts and crises that had inspired the different nations of the land to band together into three distinct alliances: the greater Daggerfall Covenant in 2E 566,[24] the Ebonheart Pact in 2E 572,[8] and the first Aldmeri Dominion in 2E 580.[25][26] The competing ideologies of these alliances set them on a course for war; tensions between them were further exacerbated by the Soulburst and subsequent military aggression of the Empire of Cyrodiil under Empress Regent Clivia Tharn. Each alliance saw the opportunity to overthrow the corrupt Imperial regime and install their own emperor on the Ruby Throne, but also had to deal with the other two alliances. As the armies of the Covenant, Pact, and Dominion invaded Cyrodiil with the goal of capturing the Imperial City, they additionally launched attacks against each other. The war's ultimate outcome is unknown, but all three alliances, as well as the Empire of Cyrodiil, had ceased to exist by the ninth century of the Second Era.

The Tiber Wars (or Tiber War, also called the Talosian conquest) were a series of conflicts spanning through the second half of the last century of the Second Era, started by the Colovian warlord Cuhlecain and continued by his general Tiber Septim. The results of the wars were manifold, most important of them being the end of the Interregnum with the founding of the Third Empire with Septim as its first Emperor, the proclamation of the Third Era, and the unification of Tamriel for the first and only time in its history.