After the death of Kodlak Whitemane, Vilkas is looking for revenge. He wants to go after the Silver Hand for the attack on Jorrvaskr and the further affront of stealing the fragments of Wuuthrad. With no questions asked, Vilkas will then act as your follower all the way to the Silver Hand hideout at Driftshade Refuge, a small fort southeast of Dawnstar. Upon arrival at the fort, dispose of the two Silver Hand members outside, a guard at the entrance and an archer on the roof, then head inside.

Den of the Silver Hand[edit]

Not surprisingly, Driftshade Refuge is crawling with hostile Silver Hand members, so take advantage of your follower and kill the opposition one by one. In the two-leveled room with many boxes on the floor, make sure to search for An Explorer's Guide to Skyrim which will add a few map markers for later exploration. It is located on a bookshelf beneath an elk head mounted on the wall. The tunnel north of the room contains a locked door, so unlock it and wipe out yet another Silver Hand. In the next room, a set of spears blocks the entrance but the corresponding lever is easily located right next to the spears. Proceed forward and enter Driftshade Cellar.

After the first turn, make sure to loot the hidden treasure chest, then follow the path and make use of the Spike Wall trap to dispose of yet another enemy. Ignore the locked cell with the dead werewolf, activate the trap again and run to the area behind it for another treasure chest. Hit the pullbar on the wall to get back out, and head forward to another room with two enemies and, hidden on a shelf, the Light Armor skill book The Rear Guard. The cellar now turns into a snowy cave, and the next room is in two levels, with a Silver Hand sniper on the ledge above. Kill him and examine the cages, one of them holds a living werewolf, who will attack you if you pick the lock, the other one contains a dead horse. 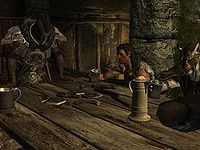 The Fragments of Wuuthrad

After passing through a torture chamber, the next large chamber contains more enemies, an apothecary's satchel, a coin purse, and two potions on a bookshelf behind the fireplace. Take the only available path, leading back to an initially inaccessible part of Driftshade Refuge. The first chamber contains the three remaining members of the Silver Hand, the One-handed skill book 2920, Morning Star, v1, the Block skill book Warrior, a treasure chest with considerable loot and finally, the stolen Fragments of Wuuthrad. Use the door to the south for an easy escape route, then return to Jorrvaskr. As soon as you arrive, Vilkas will inform you that you should meet up at the Skyforge and pay your respects to the deceased, but now avenged, Whitemane. This will end the quest and start the next one, Glory of the Dead.