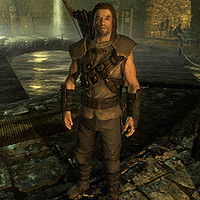 Vipir The Fleet, a Nord thief, is a member of the Thieves Guild and the master trainer for Pickpocket. Apparently, he earned his nickname for running all the way from Windhelm to Riften instead of mounting his horse after a botched job. However, other guild members are clear his stories should be taken with a pinch of salt. He also makes regular advances to Sapphire, which she just as regularly turns down.

Notwithstanding his name-earning athletic feat, Vipir lives a relaxed existence in the Cistern. He wakes up every day at 8am and spends two hours wandering around the central section before heading to the training room to practice his archery. At 2pm he heads back and loiters around until 6pm, when he heads to the cooking spit for a two-hour dinner. He then stays up until 2am, when he heads back to his bed, which is separated from the kitchen by a wooden screen.

He wears the standard Thieves Guild armor, gauntlets and boots and is equipped with a steel sword and a hunting bow supplemented by 12 steel arrows. He also carries three lockpicks and up to 18 gold coins.

When greeted he may reply:

"You're making waves around here. I like that. If you ever want to talk about anything, you let me know."
"Hey, how's it going. Need pickpocket training?"
"If you need pickpocket training, just let me know."
"If you want to be a master pickpocket like me, I can get you there."
"If you wondering why they call me Vipir the Fleet, watch me outrun the town guard sometime."
"I've been a part of this Guild for as long as Mercer has been Guild Master."
"I might not be as big as some of my fellow Nords, but in a fight they can barely lay a hand on me."
"My specialty is pickpocketing. All I need is a rich mark, a moon-lit sky and I'm in my element."
"I wouldn't mind teaching the ways of the pickpocket... if the gold was right."
"I miss the glory days of this place. We had more coin stacked in the vaults than we even knew what to do with."

If you ask him about his nickname, he'll indulge you with his tale: "It was on a job a few years back... it was supposed to be a simple burglary on a house in Windhelm. I was working with Vex and we got inside with no trouble. We found the loot, and made our way out." If you point out it sounds normal, he'll press on: "Well it was, up until the point where we set foot outside. The house was surrounded by town guard... the client had ratted us out. Vex just tells me to run, so I did. Half of them went after me, the other half went after her. Vex lost them in seconds... once she steps into the shadows, she vanishes. Me? I ran... and I ran... straight through the gates of Windhelm and all the way back to Riften. Vex was waiting for me at the Flagon when I came in... drenched in sweat. Everyone just took a look at me and laughed. Well, I had forgotten we had our horses tied up just outside of Windhelm... Vex rode hers back and arrived hours before I did. So, that's how I earned the name. Now keep it to yourself."

During Loud and Clear, he'll offer a tip: "I wouldn't bother smacking at those hives with a weapon. Set 'em on fire and they'll go up like kindling." Before you convince the guild of Karliah's innocence, he'll refuse to speak with you: "How dare you bring that Dunmer bitch here." After though, he'll be stunned: "I can't believe he emptied the vault. Right from under our noses." Should you get suspended from the guild, he'll refuse to converse with you: "Until you get back into the Guild's graces, we have nothing to speak about." If you ask him about the services the Guild provides, he'll direct you to the resident fence: "I'll point you to the first and last person you're ever going to need to talk to. Tonilia. She's the Guild's fence. Treat her right and she'll make you rich. Try and rip her off and you'll have the whole Guild to answer to."

During A Cornered Rat, you can extract information from him regarding Esbern: "Lot of people looking for him. Don't know his name, but he's paid good money for nobody to know he's down here." If you ask who else is on Esbern's tracks he'll say: "Dangerous-looking elves who didn't give their names. Draw your own conclusions."

"Well... there is guy like that. He's paid good money for nobody to know he's down here, but I guess I can tell you."
"Huh. Lot of old guys around. I don't really know how I can help."
"He's holed up in the Ratway Warrens. Be careful. You're not the only one looking for him."

However, because you can only access the Cistern once you're a member, you'll never hear them.