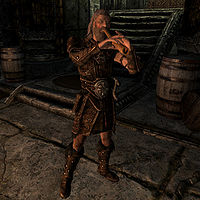 Ogmund is a Nord and the resident bard (or as he puts it, "old skald") at the Silver-Blood Inn in Markarth. While most of his time is spent at the inn, he also spends some time at his home nearby. He claims to have been very influential among Skyrim's bards, as his styles and songs are still passed down by teachers to their students at the Bards College. He will perform The Age of Aggression (or The Age of Oppression if the Stormcloaks control the city), Tale of the Tongues or The Dragonborn Comes upon request. Also, he is an expert trainer in Speech. He leaves the Silver-Blood Inn around 8pm to head home and go to sleep.

Ogmund wears a set of leather armor, including matching pairs of bracers and boots. He is equipped with an iron sword and an iron shield. He carries a key to his house and a selection of common loot and gold.

"I've seen every corner of Skyrim, but nothing is as beautiful as the battlefield."
"Songs are just old memories that help the mead go down quicker."
"Stormcloaks took Markarth. It is good to see Talos worshipped openly again." (If the Stormcloaks control Markarth)

After Search and Seizure he will only say:

"What can an old skald do for you, huh?"

A skald? Is that some kind of bard?
"That's about the truth of it. Write tales about the sights I've seen. The battles I've fought. Earned quite a name for myself when I was younger. The Bards College still teaches some of my work to their students."

What do you do around here?
"I'm a bard, trained at the Bards College in Solitude. Wanderers like you should think about applying."

The Bards College? What's that?
"It's a school that teaches music, poetry, that sort of thing. Most bards in Skyrim have been to the college at some point. If you're thinking of applying, talk to Viarmo in Solitude."

Ogmund may be seen talking with Kleppr about his performance in Silver-Blood Inn:

Kleppr: "Playing tonight, Ogmund? Everyone here is anxious to hear the old ballads performed by the True Skald of the Reach."
Ogmund: "Son, I know thousands of the old ballads. If I played all of them, everyone in this inn would be as grey as I am before I finished."
Kleppr: "Uh, right. Maybe just one of the popular songs, like "The Slaying of the Falmer Princes"?"
Ogmund: "That's a sensible lad. Now fetch me drink."